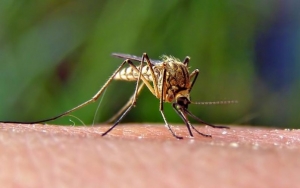 April 8, 2015 (Spring Valley) -- A dead hawk found in Spring Valley has tested positive for West Nile virus, making it the first appearance of the potentially deadly disease in San Diego County in 2015.

Elizabeth Pozzebon, director of the County Dept. of Environmental Health, advises, “Everyone should remember to eliminate standing water inside and outside homes where mosquitoes could breed; wear clothing that covers arms and legs or use repellent if you’re outside dusk to dawn; and report dead birds and mosquito breeding areas.”

West Nile virus is a disease that mainly affects birds, but can be transmitted to people, horses and other animals by mosquitoes that first feed on infected birds. Not all mosquitoes carry West Nile virus and roughly 80 percent of people exposed never develop any symptoms. Nearly all of the other 20 percent only develop flu-like symptoms. But in rare cases, some people can become seriously ill and can die.

Prevent Mosquito Breeding: Dump out or remove any item inside or outside of homes that can hold water, such as plant saucers, rain gutters, buckets, garbage cans, toys, old tires, and wheelbarrows. Mosquito fish, available for free, may be used to control mosquito breeding in backyard water sources such as unused swimming pools, ponds, fountains and horse troughs.

Protect Yourself from Mosquito Bites: Protect yourself from West Nile virus by staying inside when mosquitoes are most active, at dusk and dawn. Wear long sleeves and pants or use repellent when outdoors. Use insect repellent that contains DEET, picaridin, oil of lemon eucalyptus or IR3535. Make sure screens on windows and doors are in good condition and secured to keep insects out.