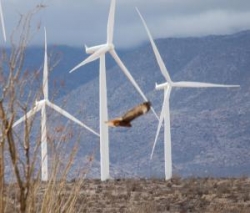 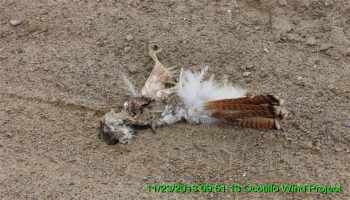 The next day, photographer Jim Pelley found a dead raptor lying on the ground at the site, one leg sliced off, apparently a victim of the turbines. It is unclear whether it is the same raptor photographed on the wing by Ewing.

A news article just published in Rewire Magazine that the new, large wind turbines such as those at Ocotillo are likely responsible for 100,000 bird deaths a year in California.  Moreover, California is the deadliest state in the nation when it comes to bird deaths from wind projects, including many that are protected under the Migratory Species Treaty or the Endangered Species Act.

These findings are t 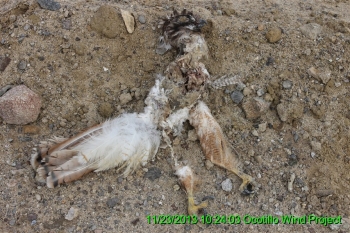 he results of a peer-reviewed study  The study, conducted by Scott R. Loss and Peter P. Marra from the Smithsonian Conservation Biology Institute's Migratory Bird Center and U.S. Fish and Wildlife Service biologist Tom Will, which appears in the December 2013 issue of the journal Biological Conservation.

What I find interesting is there is no background photo of where the decaying hawk is actually located , it could be anywhere! He blames that site for everything..

on the project site as stated.