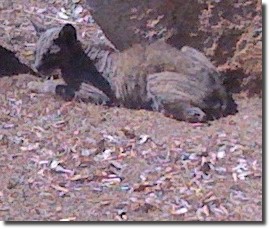 November 18, 2017 (San Diego’s East County) – Deadly outbreaks of mange in wildlife across California has been linked to second-generation anti-coagulant poisons meant to kill rats and other rodents.  Locally, numerous cases of mange have been reported among coyotes in Lakeside as recently as this month.  In Deerhorn Valley, the Antler documented bobcats dying of necrotic mange from second generation rodenticides in 2012. 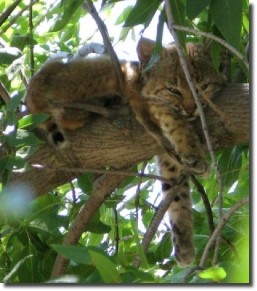 “It’s a vicious cycle,” Antler editor Kim Hamilton told East County Magazine.  “Unless the predator population is restored to healthy numbers, we’ll have these super populations of rodents. People will try to control them by setting out poisons, predator populations will diminish. And the rodents will continue to overpopulate.”

Sadly, we learned that a family of bobcats that ECM ran photos of all died of the deadly mange, including this bobcat kitten photographed in a backyard tree in Jamul.

Though banned in California in mid-2014 for use by individuals, the second-generation anti-coagulant poisons can still be applied by licensed pest control operators and some consumers may still have products at home.  They are also available in Mexico and some feed stores.  If used, these can decimate predators such as hawks, owls, eagles, bobcats, mountain lions, foxes and coyotes that eat the poisoned rodents.  The toxins can also kill pets that ingest tainted rodents.

The second-generation anticoagulants take longer to kill rodents than some other forms of poison, so a rat may feed on the poison multiple times before dying of internal bleeding. So, it’s more apt to be consumed by predators.  The poison weakens the predators’ immune systems, making them more susceptible to mange, a mite-borne illness that causes the animals to lose their fur, develop itchy and scaling skin and eventually go blind until death ultimately occurs, unless the animal is captured and treated.

The Antler has reported that NPS biologists documenting mange in bobcats in Thousand Oaks found the survival rate for bobcats plummeted from nearly 80% to just 28%.

Second-generation anti-coagulant rodenticides have been documented in over 70% of wildlife tested in California, including eagles, hawks, owls, foxes, bobcats and mountain lions, the Center for Biological Diversity announced in a 2014 press release.

In the Santa Monica Mountains National Recreation Area, park service scientists found 88% of 150 bobcats, coyotes and mountain lions tested  were found positive for one or more anticoagulant compounds and scores of animals were known to have died there from internal bleeding, the National Park Service reported in April 2014.  Exposure included California’s famous P-22 cougar, who was also sickened from mange.

But non-banned rodenticides may be even worse, some experts say.  For instance, products containing bromethalin, a neurotoxin that causes swelling around the brain, has no antidote, KPPR reported in 2014.

By contrast, 90% of dogs poisoned with the banned compounds recovered.  While treating poisoned wildlife is difficult, it is possible if an animal can be trapped and given two treatments.

Start by using exclusion and barriers to keep rodents out of your home.

Snap traps can trap and kill smaller rodents for as little as $2.

The Squirrel-N-Nator baited with sunflower seeds is reported to be very effective at catching multiple squirrels in a single cage.

Zap traps are battery operated and kill rates quickly and cleanly with a jolt of electricity, hiding the carcass inside for easy disposal. They cost $50 or more but are reusable.

The county offers free reusable snap traps inside a box so larger animals cannot get caught in the trap. The locking box is reusable. You can call County Vector Control to get these at (858) 694-2888.

Don’t kill natural predators such as gopher snakes or coyotes, that will eat rodents.

Thanks for the detailed information about rodents.