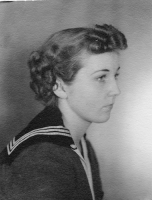 August 31, 2012 (Lemon Grove)--The last living link with Lemon Grove's pioneer past died at midday on Aug. 29 in her Lemon Grove home of congestive heart failure. Pearl Johnson Holaday -- better known by her favorite nickname Susie -- was born and raised in Lemon Grove. With her at the last were her daughter, Maxine McWilliams, and her son, Bob Holaday, and San Diego Hospice.

Susie was a charter member of the Lemon Grove Historical Society and one of its most enthusiastic supporters. Together with her beloved sister, Ruby Johnson Elkins, who predeceased her in 2002 at age 86, Susie attended every meeting of the Historical Society and contributed invaluable photographs and memorabilia over the years. They grew up in a rambling, two story, 11-room, clapboard house on Broadway that became the site of The Home Depot in 1993. That house was once a stagecoach stop. It was built in 1894 by George Troxell, an early citrus grower who had come from Rockford, IL to Lemon Grove to participate in the California land boom.

Starting in 1870 and lasting into the late 1890s, a stagecoach made monthly trips from Yuma, Ariz., to San Diego. The four to six-horse coach carried passengers, goods and mail at an average speed of three miles per hour. One of the stops on that run was the Troxell house, where travelers could obtain refreshment. The house lives on in memory and in photographs at the Historical Society, and is depicted in a large mural over the main desk in the Lemon Grove Post Office. Troxell sold the house and its seven acres and a pond to the Swedish Jacobson family.

In 1913 another Swedish immigrant couple from Minnesota, Pher Ludwig Johnson and Anna Latt Johnson, bought the house from the Jacobsons. In that house were born their two daughters and two sons, Paul and Bob. Anna was a strict, no-nonsense mother, while Pher, who owned a Packard motor car dealership and had become wealthy in the Midwest, was a lenient dad who went to the barbershop very morning for a shave. The family kept flocks of ducks on the pond, Daisy the cow, a donkey and thousands of chickens, and raised corn, peaches, pineapples, oranges, lemons, guavas, strawberries and more. They sold eggs, milk and freshly slaughtered pullets to the neighbors. 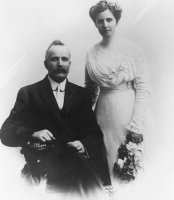 Susie attended the old grammar school on Main Street and the one on School Lane, built in 1924. She graduated from the Grossmont High School in 1936. In her chlldhood, the town had about 800 residents. They took the bus or train to San Diego--but the Johnsons often rode in their handsome Haynes touring car with side curtains that rolled down in the cold. "Our friends always begged to ride with us," recalled Susie.

Outside of her husband, Harold, Susie's closest relationship was with Ruby. They visited each other's homes daily and, in old age, lived in adjacent homes. They attended the Bethel Swedish Baptist Church--known today as the College Avenue Baptist Church--where services were in Swedish until 1935. They felt very attached to the Swedish Ohlund family that founded Grove Pastry Shop and had a passion for their white cake with white frosting. After Ruby and her husband, Max, started Lemon Grove Ranch Market, which became a local institution, Susie and Harold started a car towing and repair business next door.

The sisters were famous for buying and repairing stuffed animals and dolls, and then donating over 1,000 annually to families in Mexico and San Diego County. The project took over a two-car garage converted into a "Santa's Elves" workshop and led to television and newspaper stories, and Congressional commendation. They decorated for every holiday on the calendar and took joy in working the polls on voting days.

Susie's entire life was spent in Lemon Grove. She witnessed from the front verandah of the historic house of her birth the progression of Broadway from a narrow, rutted, dirt road to a paved street, then to the busy thoroughfare it is today. In childhood, Susie thought nothing of someone nonchalantly toting a loaded rifle while on the lookout for waterfowl or wild rabbits. The sounds of mooing cows, the occasional Model T, and the cluck of hens, the rambles over the open spaces and orchards that defined the town, and rafting and swimming with pet dogs in the pond were part of a childhood experience that has vanished from the American scene.