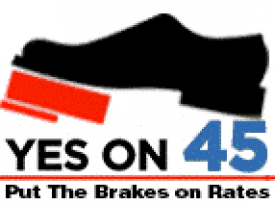 October 5, 2014 (San Diego’s East County) --The insurance industry is funding a 37 million dollar TV and radio ad campaign attacking Prop 45, a ballot measure that would stop health insurance rates from going up in California unless insurance companies can first convince the State Insurance Commissioner that a rate hike is necessary.

In California, the Insurance Commissioner already has the power to regulate proposed rate hikes in the auto and home insurance industry; Prop 45 would expand that to include health insurance as well.

Consumer Watchdog warns that the industry funding is hidden in a deceptive advertising and a marketing campaign waged by surrogates who are paid by the health insurance companies or who have financial ties to it.

California Insurance Commissioner Dave Jones is also warning consumers about what he calls “deceptive and false TV and radio commercials to mislead voters about Proposition 45.”

35 states have already passed measures similar to Prop 45. According to Consumer Watchdog and California’s Insurance Commissioner, insurance rates in those states that require oversight of proposed rate hikes have lower insurance rates for consumers than states that don’t.

The deceptive claim that Prop 45 would give one politician power to override a commission on insurance rate decisions. The commission is never named in the ads, and the claim is an outright whopper.

Jones says, “We need Prop 45 to fix that hole in healthcare reform.”

The ads also try to scare consumers by warning of a “power grab” and suggest that Jones has ties to special interests.  But Jones says, “The only power being taken away is that of the health insurers to inflict excessive health insurance rates to Californians.” Contrary to what the ads suggest, Jones says he does not accept special interest contributions from insurance companies, their boards, their employees or insurance agents or brokers.”

Prop 45 would give the Insurance Commissioner only one new power: the power to make sure that your health insurance rates are not excessive.

California law requires that ads disclose the sponsor’s industry. But the insurance industry’s ads appear to violate that requirement, failing to inform consumers that they are funded by two health insurance associations and the California Hospital Association, as well as the California Chamber of Commerce. The ads state that doctors and nurses support the No on 45 campaign, when the people depicted as doctors and nurses in the ads are actors, Consumers Watchdog indicates.

In addition to misleading the public through its advertising, the health insurance companies have hired paid surrogates, Consumers Watchdog says.

For example, the Californian Republican Party’s opposition to Prop 45 came just two weeks after it received a $15,000 from the health insurance company’s NO on Prop 45 committee, which is deceptively called “Californians Against Higher Healthcare Costs.”

Although the California Democratic Party supports Prop 45, the insurance industry’s No on 45 campaign has hired paid Democratic Party representatives in a further effort to deceive consumers, Consumers Watchdog reveals.

Jamie Court, president of Consumer Watchdog, says that health insurance companies are hiding their bankrolling of the No On Prop 45 effort because if voters find out, they will recognize that  Prop 45, if approved, will “stop rip-offs of policyholders.”

The No On 45 campaign also confuses the public by falsely claiming the public will have to choose between a state bulk purchasing pool, Covered California, for 1.2 million health insurance consumers and rate regulation for 6 million individuals and small businesses. In fact, Prop 45 retains both.

Consumers Watchdog says that by implying that consumers have to make a “choice” between Covered California and Prop 45, the TV ads falsely suggest that passage of Prop 45 will lead to shutting down California’s new health benefit exchange. Further, by making insurers justify their rate hikes and rejecting excessive increases, Covered California’s negotiating ability will only be strengthened, according to Consumers Watchdog.

In states that do let state agencies regulate rate hikes, rates have improved. Rate regulation has also helped health benefit exchanges created under the Affordable Care Act in Oregon, Maryland and New York by lowering rates that these exchanges were able to negotiate.

The TV ads also say that Covered California “rejects plans that are too expensive.” That’s also not accurate. While Covered California does try to negotiate with insurers, it has no power to reject unreasonable rate hikes. No federal or California state agency can do so, either.

So if  you think your insurance premiums are too high, whether you have private health insurance or a plan under California’s new healthcare exchange, Prop 45 would give the Insurance Commissioner the power to tell insurance companies “no” when they propose unreasonable rate hikes—and protect consumers from predatory rate hikes.

Perhaps it’s no wonder the insurance industry is opposed to Prop 45—and trying hard to hide the truth about its backing of the No on Prop 45 campaign.

...turns out my Kaiser is lying to me?