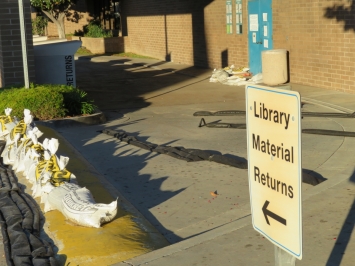 December 7, 2018 (San Diego’s East County) – Storms over the past two days brought much needed rain to our region, up to 3 inches in some areas.  But the downpour also causing flash flooding in many areas.

Several cars became caught up in rushing water up to four feet in southeast county, where major flooding occurred on Otay Lakes Road by Pio Pico RV Park and also on Highway 94 between the Jamul Casino and Jamul Estates.  Jan Hedlun, a motorist delayed due to the flooding, says  that 45 minutes after Cal Trans closed the highway, “There was no one directing traffic or telling stranded travelers to turn around and find another way home, as there has been during priori events. “No signs were being posted to prevent people from coming down Highway 94.” She asks why CHP or Border Patrol agents were not brought in to assist and why funding has not been allocated to fix the roads/drainage in these two recurring trouble spots.

In El Cajon, the County Library is closed today due to damage inside caused by flooding.

Thunder, lightning and power outages also occurred across the region due to the storm.

Many areas in East County received significant rainfall including nearly 2.5 inches in Santee, La Mesa and Lake Murray,  1.6-1.7 inches in Julian, Cuyamaca and Pine valley,  between an inch and 1.5 inches in Lakeside, Alpine and Ramona, and 0.68 of an inch in drought-parched Borrego Springs. 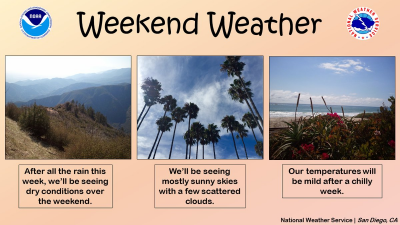 forecast for this weekend.

I received 2.65 inches rain at my house in Lemon Grove with only a little lightning. My son's place near Harbinson Canyon had a lot more lightning, rain and wind.. He said he had candles and a flashlight ready. . This was among the most active rain and wind storm I've seen in many years.