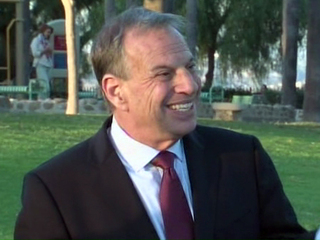 With this concession, one of the most divisive races in recent San Diego memory is over. Filner will be inaugurated on December 3.

With the victory of Sherri S. Leightner at 54% over her challenger Ray Ellis with 46%, the City Council will also be in Democratic hands, though FIlner has pledged to consult with people who opposed him as well as those who supported him as he sets up his administration.

Filner is also considered an ally to organized labor, who celebrated his victory as well. An unabashed liberal, Filner has said he will “celebrate” public employees and end the era of demonizing civic workers.

This also marks the return of a San Diego native son, since Filner served on the City Council in the 1980s, before his election to Congress. It is a full circle for the political career for Filner.

"I know that ballots are still being counted, and I will absolutely ensure every vote counts and that process will happen in respect above my decision today to concede this race," DeMaio said today, ECM news partner 10 News reported. "So every ballot will count, but I want to give our next mayor the most time possible to put together a solid administration and I want to begin the process of healing our city and bringing all sides together."  DeMaio currently trails Filner by about 9,800 votes, though hundreds of thousands of absentee and provisional ballots remain to be counted.  He concedes the prospect of overtaking Filner are slim.

DeMaio said he would help Filner make a successful transition and move San Diego forward. He said he was optimistic to hand Filner a city government that was on the right path to financial recovery.

Unlike the conservative DeMaio, whose focus was on achieving fiscal responsibility through budget cutting and pension reductions, Filner envisions growing the revenue side of the balance sheet, investing in growth for the region through jobs in industries that combine our “green sectors” (alternative energy, efficiency technology) and “blue sectors” (maritime trade, ship building, ocean research) into what he calls an “aqua economy.”

Filner estimates that his plan will add 50,000 jobs by 2020 in the San Diego region, generating jobs that will average $50,000 or more in pay.  He also aspires to lead creation of an innovation cluster, niche manufacturing, local preference for construction hiring, and prioritized hiring of veterans—as well as a veterans office in city hall. He pledged to have his fiancé get to work on issues impacting the disabled and those who are homeless.

To learn more about Filner’s vision for the city, see http://www.bobfilnerformayor.com/issues.html.

While I have no use for Bob Filner, San Diego dodged a huge bullett by sending Carl DeMain backk home.  Hopefully the san bagger will now leave town