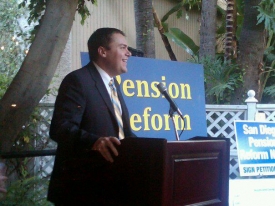 April 20, 2012 (San Carlos) – San Diego Mayoral candidate Carl DeMaio has announced plans to hold a town hall meeting on Saturday to discuss his plans to “fix the City of San Diego’s budget problems” through pension reform, according to his campaign.

The event will be held at the Elks Lodge, 7430 Jackson Drive in the San Carlos/Navajo area at 11 a.m. on Saturday, April 21.