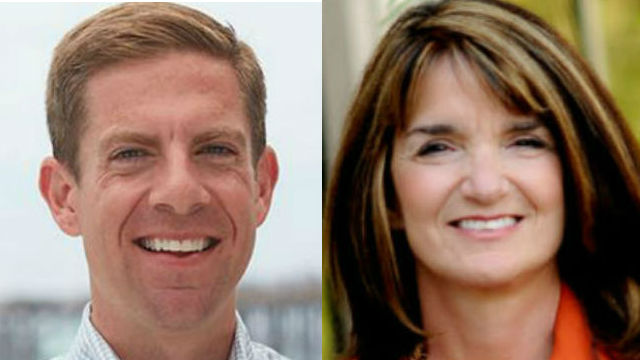 Endorsed by President Obama and Sen. Bernie Sanders, Levin would help Democrats win back the House — as earlier projected. A Dana Point resident, Levin rode a Blue Wave of district energy that included close to 70 weekly protests at Issa’s Vista office, contributing to his January decision to bow out.

Despite a cloud of federal corruption charges, Republican Hunter clung to an early lead for a sixth term in Congress — winning 53.5 percent to 46.5 percent for Democrat Campa-Najjar.

Hunter, the son of former Rep. Duncan Lee Hunter who endorsed Donald Trump early, said he and his wife were victims of a Justice Department witch hunt. They pleaded not guilty to 60 counts of violating campaign finance and fraud laws.

The heavily Republican East County district was expected to favor Hunter, who still faces a Dec. 3 hearing in his court case.

In the border district that includes Imperial County, Vargas was ahead 66.6 percent to 33.4 percent in early returns.

Democrat Peters was cruising to a fourth term, leading Republican Qudrat, a former Defense Department prosecutor and one of the few Muslims running for Congress.

Democrat Davis easily was winning a 10th term over Republican Murtaugh, a former One America News commentator who, at 26, campaigned as the youngest major-party candidate in the nation.

Davis was ahead 64 percent to 36 percent in early returns from the Democratic-leaning district that includes central and eastern San Diego, eastern Chula Vista, western El Cajon and all of Bonita, La Mesa, Lemon Grove and Spring Valley.

"The voters of California’s 50th Congressional District have once again made it clear that their issues and priorities are consistent with my issues and priorities as their Representative in Congress. This election reflects what is important to us here in San Diego and Riverside Counties, issues on which President Trump has had success, but understanding that there is undoubtedly more work to be done. For 10 years, I have consistently and unapologetically focused on rebuilding the military, protecting the border, which includes a border wall, cutting taxes, supporting our veterans, creating small business jobs and economic development, upholding the 2nd Amendment and protecting the sanctity of life. I am proud of this record and I intend to make it business-as-usual in working with President Trump for the next two years to achieve more success, especially given the challenge of having a Democrat-led House. I thank my constituents for their continued trust and support and I am grateful and honored for the opportunity to continue serving them in Congress."