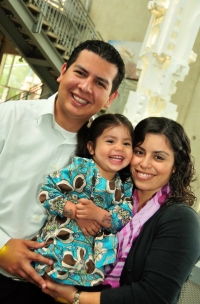 This means two things for the young Councilmember.  The party will now work for him and no other candidate, including walking precincts, phone banking and any mailings to party members.

On the eve of the Democratic Central Committee meeting, Alvarez released this video to tell his story.  Raised in Barrio Logan, he has pledged to support social, economic and environmental justice. A former social worker and political activist, he is married with a young child and a second on the way.

The party endorsement of Alvarez snubs Nathan Fletcher, an ex-Assemblyman, and former City Attorney Mike Aguirre, giving momentum on the Democratic side of the race to Alvarez.

Why would the Democratic Party endorse such a youthful candidate? There are several reasons.

Aguirre lost a city wide office, so he might be perceived as weak against Councilman Kevin Faulconer, the only prominent Republican in the race.

Former Assemblyman Nathan Fletcher has engendered mistrust among some party faithful, after he switched from Republican to Independent and then to Democrat. There is also an internal fight in the party between the progressive faction and the conservative wing of the party  Last night’s vote marked a victory for progressives in the quest to fill the seat left vacant by Bob Filner, another progressive, who resigned amid sexual harassment allegations.

The endorsement of Alvarez is also a strategic move aimed at giving direction to party members to avoid an outright win by Faulconer in the November 19 special election, since just one prominent Republican pitted against three well known Democrats and numerous lesser-known names.

If no candidate gets over 50 percent of the votes, there will be a run off election between the top two vote getters on the ballot—a scenario that now appears far more likely.