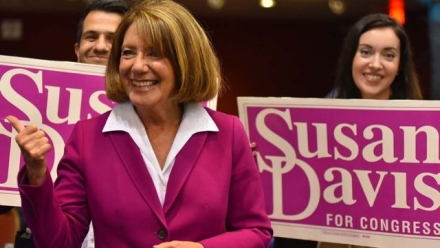 ​September 4, 2019 (San Diego) - In a stunning announcement Wednesday, Rep. Susan Davis said she would retire after the current term in Congress — her 10th since election in 2000.

“I have struggled to make this very difficult decision,” she said in a statement. “I will not seek another term in Congress. My decision today represents a desire to live and work ‘at home’ in San Diego.”

The 75-year-old Democrat is the dean of the San Diego congressional delegation and San Diego’s second woman to serve in Congress. 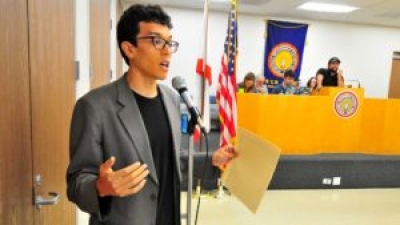 In March, when he announced his race, Caballero criticized Davis for not taking bold action in a reliably blue “leadership” district.

In a Facebook post, local Democratic Party Chairman Will Rodriguez-Kennedy saluted Davis for a “lifetime [of] distinguished public service to our country, our county and our party.”

In a phone interview Wednesday, Rodriguez-Kennedy said he learned of the Davis news “like everyone else — with her announcement.”

“I would have appreciated a heads up, but I don’t know,” he said with a laugh.

He conceded Caballero is the current front-runner, “but that could change on a dime.”

By 5:30 p.m. he’d already heard of other potential candidates.

And Sara Jacobs, a granddaughter of Qualcomm founder Irwin Jacobs — who took third in the June primary race for the 49th District seat won in November by Mike Levin — could “easily jump into this district.”

Rodriguez-Kennedy said a pre-endorsement meeting of the state Democratic Party is set for Oct. 5.

“If you come out of the pre-endorsement caucus with the [House] endorsement, you’ll very likely get the state party’s endorsement,” he said. Final consideration will be among the 3,000 members of the Democratic state Central Committee.

“We … now look forward to electing a Democrat to carry on the fight for social and economic justice as Rep. Davis has done for the better part of two decades of congressional service and leadership,” he said.

At a mid-June climate-change forum at San Diego’s High School of Creative and Performing Arts, Davis announced that she would “be signing onto the Green New Deal,” a move coming after considerable pressure from local groups. 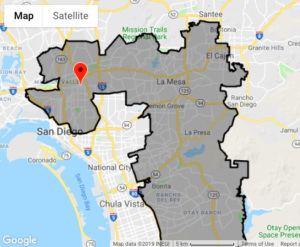 As 53rd District representative, Davis is the second highest-ranking Democrat on both the House Education and Labor Committee and the House Armed Services Committee having chosen those committees to best represent San Diego’s strong education and military institutions.

Her district takes in San Carlos, Serra Mesa and Linda Vista on the north to Mission Hills on the east, La Mesa, Lemon Grove and Spring Valley on the east and Chula Vista east of the I-805 on the south.

Assemblyman Todd Gloria tweeted: “Her steady hand in Congress for the last 20 years has been a blessing to our nation. As my lifelong mentor, I can’t wait to have her home full time. We talked today and she’s ready to volunteer on my mayoral campaign.”

She serves as the chair of Higher Education and Workforce Investment Subcommittee where she focuses on expanding apprenticeships and making college affordable.

Her office won the highly competitive “Best in Congress” awards from the Congressional Management Foundation for both Constituent Service and Workplace Environment.

During her soon to be 20-year tenure in Congress, Davis influenced many significant pieces of legislation, said her office.

She opposed the Iraq War, supported and contributed to the seminal Affordable Care Act, initiated the first hearing on “Don’t Ask Don’t Tell” as chair of the House Armed Services Military Personnel Subcommittee and added many provisions to the national defense bill every year.

She was integral in bringing large projects to San Diego including the San Diego State University Transit Center and the James M. Carter and Judith N. Keep United States Courthouse, she said.

Before Congress, Davis served in the state Assembly and was president of the San Diego Unified Board of Education. A former social worker, she first became involved in politics through the League of Women Voters and by being active in her sons’ schools.

Davis made it clear she would finish out her 10th term in Congress with vigor and said she hopes her successor in office “will put public interest above self-interest.”

“She will go down in history of our city as a role model of a true servant of the people,” he said.

Davis’ announcement could have ramifications for other local, state and federal races around the county, should an already campaigning candidate jump into the race to succeed her.

Assemblyman Gloria, D-San Diego, is a former staffer in Davis’ office and has long been rumored to be interested in the seat but is currently running for mayor of San Diego.

Meanwhile, a “hopeful fan account” was launched calling on Assemblywoman Shirley Weber to run for the vacated Davis seat.

The Cook Political Report’s Partisan Voter Index rates the district as a lock for Democrats; former U.S. Secretary of State Hillary Clinton won the district by 35 points in the 2016 election.

Davis said she does not yet know what she plans to do after leaving office but indicated she has multiple options to continue serving San Diego residents.

“I am grateful to have you as engaged and concerned citizens of our great nation and the San Diego community we love,” Davis said. “I know you will pick your next representative wisely. That person will also represent me, so I will look to those who put this noble pursuit of public interest above self-interest. I sincerely hope that has been a mark of my service.”

Times of San Diego has updated their story with names of more potential candidates, which we've added in above.

who are the potential candidates? i heard about georgette gomez and todd gloria, but is there anyone else?