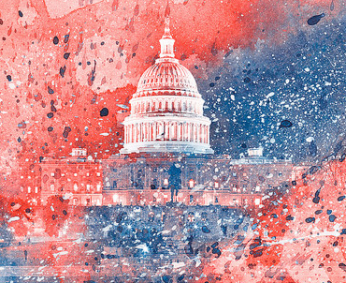 Update November 9, 2018:  An Arizona Senate race has flipped, with a Democrat now leading, reducing Republican gains to 2 seats if that holds.  A recount is also looming in Florida, where a Republican stlll leads.

November 7, 2018 (Washington D.C.) – Democrats flipped over 30 seats from red to blue nationwide, regaining control of the House of Representatives in Congress by a 223 to 200 margin.  Only 218 seats are needed for a majority in the 435-seat House, where a handful of races have not yet been decided.

In the Senate, by contrast, Republicans picked up three seats to boost their majority from 51 to 54 in the 100-seat body.

Democratic voters polled have said they were most motivated by fear of losing healthcare and by a desire to obtain oversight over the Trump administration.  The latter can be obtained with House oversight committees chaired by Democrats now empowered with subpoena powers. House Democrats can also block legislation, such as preventing a full repeal of the Affordable Care Act (Obamacare) or efforts to slash Social Security benefits.

But House Democrats are not likely to impeach President Trump, since any impeachment trial would be conducted by the Senate and require a vote by two-thirds of all Senators to remove the president form office.

Republicans meanwhile strengthened the Senate’s ability to approve Trump’s nominees for justices including Supreme Court, as well as cabinet officers.

The next cabinet position to be filled will be Attorney General Jeff Sessions, who resigned today after Trump threatened to fire him. Trump’s sole complaint has been Session’s decision to recuse himself from oversight over Special Prosecutor Robert Mueller’s investigation into the Trump campaign and administration’s alleged collusion with Russia to influence the election, even though Sessions was legally  required to recuse himself due to a conflict of interest.

Critics view the move as an attempt to obstruct justice and halt the Mueller probe, which has already resulted in dozens of indictments and convictions.

The midterm elections also brought changes to many statehouses across the nation.

Kobach gained infamy for leading voter suppression efforts as Secretary of State with software that removed a disproportionate number of minorities improperly off voting roles. Also an attorney, he has drawn criticism for his work with nativist anti-immigrant groups and as head of President Trump’s short lived commission on voting issues.

But Republicans scored key saves in Florida, Ohio and Iowa, states viewed as crucial for the 2020 presidential race, defeating strong Democratic challengers. In Georgia, where allegations that the GOP suppressed black voters, Republican Brian Kemp has declared victory with a narrow lead over African-American challenger Stacey Abrams, who sought to become the nation’s first African-American governor. Abrams has said she will not concede until all ballots are counted. If the count holds, the state will remain under GOP control.