By Susan Taylor and Miriam Raftery

The Governing Board of the La Mesa-Spring Valley School District will likely have a Democratic majority if early election leads hold for Caitlin Tiffany, Rebecca McRae and Brianna Coston .They would represent Area 1, 2, and 3, respectively, and were endorsed by both the California Teachers Association and the San Diego County Democratic Party.

Tiffany, an assistant biology professor at Mesa College and assistant dance coach at Santa High School, has 63.6% of the votes in her race against former board trustee Jim Long.

Long and Moody were endorsed by the county Republican Party, while Long had no party endorsement.

Historically, the LMSV district has been controlled by a Republican majority for many years. At times, that majority has drawn controversy, such as when the board refused to allow a speech by President Obama to schoolchildren to be shown in the district’s schools, or when the board filled vacancies by appointments of conservatives, including a church secretary chosen over more applicants with education experience including a PTA president and bond LMSV oversight committee member and a former teacher’s union representative.  The board has also faced allegations of racism raised by trustee Charda Bell, a Democrat who opted not to seek reelection amid a residency challenge. Megan Epperson, a Republican, also did not seek reelection, creating two open seats.

While the board has also faced pushback from conservative parents concerned over COVID restrictions and learning losses during the pandemic, moderate and progressive voters appear to have won out over conservative voices. 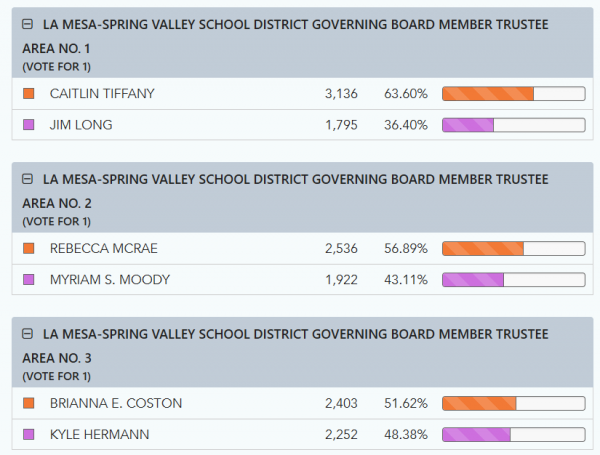 Those kids are screwed!