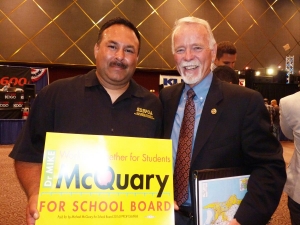 On the County Board of education, Alicia Munoz, also endorsed by the Democrats, leads Katie Dexter  51.44% to 48.56% with all precincts counted in the 3rd district, though absentee ballots remain.

Democrats won both seats on the ballot in the San Diego Community College District.  Maria Nieto Senour beat Donna Woodrum by a 56% to 44% margin, while Peter Zschiesche won handily over Lan Jefferson by a 60.5% to 39.5% margin.

At the state level, the California State Superintendent of Public Instruction race will result in a run-off between two Democrats: incumbent Democrat Tom Torlakson (37.78%)  who in a virtual dead heat against Marshall Tuck (37.42%).  Trailing far behind is Lydia Gutierrez (24.81%), the Republican. Torlakson is backed by the California Teachers Association, while Tuck, who previously ran a charter schools organization and a reform group called Partnership for Los Angeles Schools, has backing from billionaire donors.