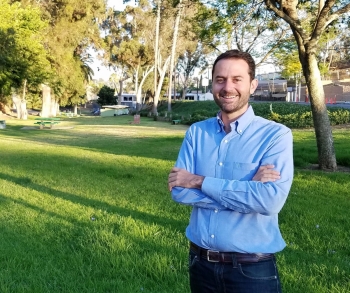 Sterling has long been one of La Mesa’s most popular politicians, winning past reelections by wide margins. But she missed a key La Mesa debate this election cycle due to falling and breaking her arm.  Sterling had initially announced she would not seek reelection,  but later changed her mind after constituents urged her to run.

Colin has served in Governor Jerry Brown’s administration working on affordable housing issues.  He is currently an attorney for Circulate San Diego, a group advocating for transit-friendly communities.

Councilman Bill Baber states,"I am looking forward to working with Colin Parent on our City Council. The voters know Kristine is doing a great job.  She deserved four more years. La Mesa is lucky to have her on the Council."

La Mesa residents also narrowly approved Measure U, an initiative to legalize and regulate medical marijuana dispensaries, by approximately a 51.4% to 48.6% margin.

Circumstances change, Gene. You recall the streetscape, no doubt. It required that many of us on the Blvd. work longer hours to make up for lost business.
I sent a letter of resignation to the Council, City Manager, and Dorothy Leonard. Pursuant to normal policy, the city will be able to appoint another representative in January. or just stay with Carol Lockwood. It's really a one man job, but Carol and I both attended. In my absence, the city was always represented. Had Carol not been there, after I resigned the spot may have been vacant like it was for months prior to our appointments. Kudos to Carol!

Of course circumstances change! Given, though, we have someone new to the Council that seems eager to become a part of the five member team and contribute to making 'Our Community' as good as it can be I find it difficult to understand how it is constructive to continue to berate this individual post election. Maybe a little wait and see before we all pile on him? No?

Craig, your numerous and constant criticisms of those you deem unworthy of positions are noted however, when Council Member Kristine Alessio, your partner, gets you these positions shouldn't you at least bother to check that you can honor the commitments you yourself choose to make beforehand?
Is that worthy of your criticism?

 Craig Maxwell has missed three meetings as City of La Mesa CAC representative. (City of La Mesa Councilmember Alessio stated that Craig is not able to make the 6:30 CAC meetings due to his business responsibilities and that Carol Lookwood, current alternate, will be replacing him after he resigns.)

It was 83K at last count and was expected to go over one hundred by the end.
Goodbye to local representation, hello to carpetbaggers.

So well over $60,000 in outsider money can actually buy a council seat for newcomer in the fair city of La Mesa! The average person don't stand a chance against the well connected professional politician. Say goodbye to citizen representation.