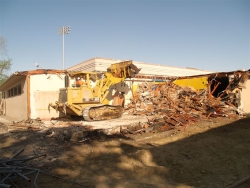 El Cajon, Calif. – It was out with the old and in with the new at Grossmont High School as a 70-year-old relic came down. The aging Building 900, which was a concrete structure constructed on the La Mesa campus in the mid-1930s, was recently cleared to make way for a new state-of-the-art science building as part of the landmark $274 million Proposition H school bond passed by East County voters in 2004.

Built between 1935 and 1937 with a price tag of about $43,000, Building 900 was a product of the Works Projects Administration (WPA) as part of Franklin Delano Roosevelt’s New Deal, which employed millions of people building public buildings and infrastructure projects in the 1930s.

The 15,000-square-foot building originally housed the wood, metal and auto shops and later the boys’ locker and weight rooms. The WPA architect at Grossmont High School was Frank L. Hope, who later went on to design the Cabrillo Monument and San Diego Stadium.

In the past 15 years, Building 900 has had a variety of uses, most recently serving as a weight room on the lower level and classrooms and computer labs on the top floor. However, after seven decades of service to La Mesa high school students, the aging building had come to be a poster child for the upgrades and modernization needed to accommodate modern student life. In keeping with our “green” policy, the building was demolished in phases in order to recycle the majority of the construction materials.

The building’s demolition was part of Phase 3A of the Proposition H construction bond program, clearing the way for a new structure, valued at $6 million, which will house 10 state-of-the-art science classrooms for teaching college preparatory chemistry, biology and physics. The building will be ready for occupancy in Spring 2010.

Proposition H was approved by 62 percent of voters in March 2004 to fund repairs of aging schools in the district as well as the construction of a new school. It was the first bond passed by voters in the East County in 37 years. The program includes student safety improvements, upgrades and expansion of technology and other infrastructures, renovations of outdated classrooms and the construction of new science classrooms.

Established in 1920, Grossmont Union High School District encompasses an area of approximately 465 square miles, including all of the cities of El Cajon, Santee and Lemon Grove, most of the city of La Mesa, a small portion of the city of San Diego, and the unincorporated areas of Alpine, Dulzura, Jamul, Lakeside and Spring Valley. Over 24,000 students are served by the district’s schools.  More information about Grossmont Union High School District can be found at www.guhsd.net.