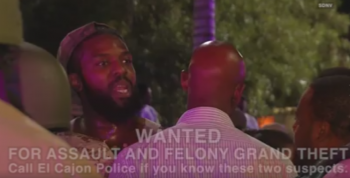 After receiving several 911 calls of 50-70 protesters blocking cars and breaking car windows, police declared an unlawful assembly. 10 News reports that tear gas and pepper balls were deployed by police. The station posted video of the incident and reported that protesters also knocked a motorcyclist off a motorcycle. Glass bottles were also thrown at officers. Two arrests were made, according to police.

“A large group of demonstrators marched through the streets throughout the evening and into the early morning hours,”said Lieutenant Rob Ransweiler.

Police are also investigating theft of a $15,000 camera taken forcibly from a photojournalist.   A video viewed by 250,000 people on social media has led to identification one suspect, San Diego News Video reports.  Public help is requested to identify a second subject shown at the end of a video here: https://www.facebook.com/SDNVtv/videos/918156954956981/

In addition, police responded to a disturbance yesterday near the scene of the incident, when an individual was confronted by demonstrators. “While that person was visibly injured, he refused treatment and left the area,” Ransweiler stated.

El Cajon Police urges all community members to remain calm during these trying times and allow the process of the investigation to continue while allowing the community to safely voice their concerns.

“In general, the majority of the people gathered in our city have prayed and spoken their minds about the relationship between the community and law enforcement in general.  As we are able, we will continue to support the community’s right to safely voice their opinions in a peaceful manner,”  an ECPD press release states.

ECPD has set up a Tip Line for citizens to be able to provide information to the police department about the officer involved shooting and about the planned and unplanned protests.  This Tip Line is not intended to be used in the event of a crime or action that requires immediate response by the police department.  Please use 911 for those cases.