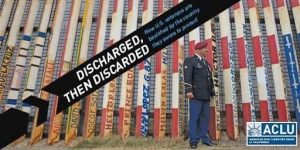 July 2, 2021 (San Diego) -- The Department of Homeland Security and the Department of Veterans Affairs today jointly announced an interagency initiative to bring home the untold numbers of veterans who, over the past 25 years, were unjustly deported and banished from the United States despite being promised citizenship opportunities in exchange for military service as noncitizens. The Biden administration further pledged to ensure that soldiers serving our nation can obtain their promised naturalization.

Since 2015, the ACLU of Southern California and the ACLU of San Diego and Imperial Counties have partnered with the Deported Veterans Support House in Tijuana to urge the return to the U.S. of deported veterans, an end to the deportation of veterans, and improved access to military naturalization.

“We applaud the Biden administration’s commitment to end the unconscionable deportations of America’s veterans and to engage in a meaningful process to bring our banished veterans home,” said Jennie Pasquarella, director of immigrants’ rights and senior staff attorney at the American Civil Liberties Union of Southern California.

“U.S. veterans should be treated with the same honor and respect regardless of their citizenship status, and should never be permanently banished from their adopted country, their families, and all that makes life worth living. Too often, U.S. immigration policies have resulted in this country banishing its veterans to countries they left as small children and committing them to lives of isolation and destitution. This is not how we honor our service members.”

“We thank the administration for its dedication to reversing these immoral practices and look forward to working with officials to ensure that its commitments are realized in the repatriation of our veterans.”

The plan fulfills a promise Biden made during his campaign for the presidency. At a 2019  televised town hall in Grinnell, Iowa, he was asked what he would do about deported veterans. He answered, “Bring them back,” and went on to say that he and his wife had the honor of swearing in 120 soldiers and sailors, "none of whom were American citizens, all who had volunteered.”

“The Department of Homeland Security recognizes the profound commitment and sacrifice that service members and their families have made to the United States of America,” said Secretary Mayorkas. “Together with our partner the Department of Veterans Affairs, we are committed to bringing back military service members, veterans, and their immediate family members who were unjustly removed and ensuring they receive the benefits to which they may be entitled. Today we are taking important steps to make that a reality.”

“It’s our responsibility to serve all veterans as well as they have served us – no matter who they are, where they are from, or the status of their citizenship,” said Secretary McDonough. “Keeping that promise means ensuring that noncitizen service members, veterans, and their families are guaranteed a place in the country they swore an oath – and in many cases fought – to defend. We at VA are proud to work alongside DHS as to make that happen.”

As part of the DHS initiative, Secretary Mayorkas directed U.S. Citizenship and Immigration Services (USCIS), Immigration and Customs Enforcement (ICE), and Customs and Border Protection (CBP) to immediately conduct a review of policies and practices to ensure that all eligible current and former noncitizen service members and the immediate families of military members are able to remain in or return to the United States, remove barriers to naturalization for those eligible, and improve access to immigration services.

USCIS, ICE, and CBP will develop a systematic approach to review the cases of veterans who were removed. USCIS, ICE, and CBP have also committed to protect and expand naturalization opportunities for current and former noncitizen service members and the immediate family of military members.