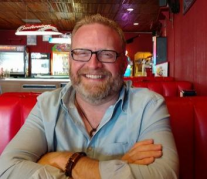 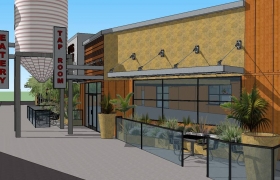 February 29. 2016 (La Mesa) – Aaron Dean, owner of the Depot Springs Beer Company, in an exclusive interview with East County Magazine, spoke exuberantly about the brewery/restaurant/music/event venue now under construction in a neighborhood shopping center on Fletcher Parkway at Dallas Street—and his vision for the facility’s contribution to revitalizing the community.

Dean says he wants the kind of place where families can go.  “Depot Springs was conceived with the community, families and even its surrounding neighbors in mind.  We envision a place where you may drop in two or three times a week.”

He grew up in La Mesa and lives nearby with his family.  “My grandfather bought an interest in this shopping center back in 1959.   I remember visiting retailers with him, collecting rents.”

At Depot Springs Beer Company, he explains, “We’re all about great food that will be locally sourced when possible.”Executive Chef Matt Richman is a San Diego native who likes tapping into his heritage for inspiration when blending California ingredients with Latino and Mediterranean flavors, according to his bio on Facebook. ” 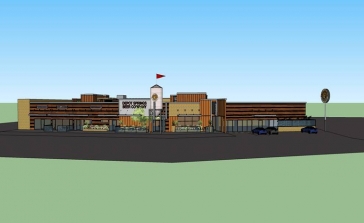 Dean told ECM, “It won’t be bar food. We’ve kicked it up a notch.  Yes, we’ll have flatbread pizzas and burgers, but we’ll also have fish and steak. There will be lots of healthy food options for kids without the usual corn dogs or noodles.”

The brewery on-site will feature a variety of craft beers. “People will be very, very happy with our beers. These will be drinkable beers, refreshing,” Dean pledged. “This is not about highest alcohol content, rather it is about crafting a fine crowd-pleasing brew.  We will have our craft beers and IPA’s plus seasonable beers like pumpkin or chocolate.”

Depot Springs will also have a respectable wine list including wines from local craft wineries.

“There will be a full liquor bar for amazing craft cocktails. though personally I’m a beer and wine guy,” Dean notes. “Mostly I want people to have that craft experience from sodas to wines to beers.”

Sodas?  Yes, even root beer and soft drinks will be crafted.

“It’s important not to be a chain,” says Dean, who indicates the facility will be open for lunch, dinner and weekend brunches. But the experience will be about more than just food and beverages.

He adds, “We invested an amazing amount in an outdoor movie screen and outdoor lawn.   Kids will have plenty of room to play, but not your usual slides and tubes.  The kids’ area will be media-free.   The kids here can learn art and walk away with something they have crafted. We have dedicated over 2000 square feet for the 'kids zone.'"

While many in the community have voiced support for this revitalization project, a few neighbors voiced concern in a recent La Mesa town hall meeting at Parkway Middle School across the street, as ECM previously reported. http://eastcountymagazine.org/la-mesa-town-hall-reveals-community-unrest-brewing-over-beer-and-outdoor-music-venue  Concerns focused mainly on noise and parking.

Dean emphasized that he has reached out to neighbors and made some changes to his initial plans. 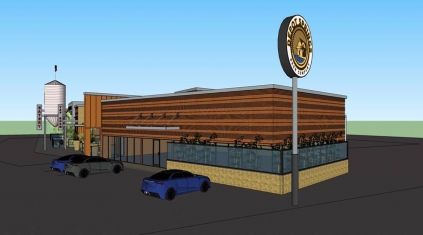 “Now it’s much smaller. There is no second story.  We will have indoor and outdoor stages.  The indoor facility will have a bar, restaurant and small event space within the restaurant,” says Dean, adding that the outdoor courtyard will be used for music, movies and other events. Seating will ultimately be determined by the fire department and the vision that Aaron Dean has for the center. He wants people to truly enjoy amplified acoustic music, from blues to jazz to classic rock.

To contain noise, he’s building an 18-foot-high wall around the perimeter.  “Speaker technology these days is tremendous.  You won’t hear the noise.  We have spent a lot on a sound system with sophisticated speakers. Every decibel is controlled,”  he said, adding, “this is not a concert venue.  I won’t have hip-hop or punk that would disturb the neighborhood. We are a family oriented facility. No where in San Diego is there a place on a constant basis to take my children and listen to great music..”

Besides repairing, paving and striping the parking lot, Dean said Depot Springs Beer will provide incentives for those who take the trolley, which stops about a quarter mile away. “Show us your trolley tickets or taxi receipt, show us you biked or walked here and we will give you something,” he said, adding, “We will have a shuttle to Grossmont Center and to the trolley station during peak hours.  Our staff will park off site. Souplantation and Michael’s are working with us to do the same;  that is a total of 65 cars that won’t be in the parking lot for long hours.”

Dean has assembled an impressive team for the project. “We have an amazing team--talent and experience derived from Gaslamp district development,” he said.  Our Executive Chef is Matt Richman. He is a culinary trained chef and will bring amazing food to the project. Our Head Brewer is Stuart Long. Stuart spent 3.5 years working at Lost Abby and helped start Silver Moon in Oregon.”

He adds, “Our brewer and executive chef will be accessible. What’s been lost (in other businesses) is customer service.  We will be creating 50 to 60 permanent jobs.  I would rather pay more for good help that is loyal and not have the turnover.  You will find us extremely customer service based.”

There will also be special benefits for loyal customers.  “We are going to have a membership program that’s unique,” Dean told ECM. “We  will invite our members to special dinners with the brewer and executive chef.  There will be private events, brewery tours or movies, a place for non-profits and clubs to hold meetings.”

Depot Springs hopes to have the doors open in Late June this summer. The brewery, if all goes well, will open a month earlier.

For more information, you can visit http://depotsprings.com/ or check their Facebook at: https://www.facebook.com/depotsprings/.  We are told that fans of Facebook will receive special offers.

This glowing article appears to be written as a paid promotional piece. The reality is that there is a petition, I am informed, with at least 100 signatures, by neighbors of this venue, concerned about an obvious increase in noise, parking problems, and drunks and/or impaired drivers putting school children and residents at grave risk. Music daily until midnight is what the Depot Springs literature boasts of, with open air (outdoor) stages. A large brewery making this kind of noise and whose patrons imbibing their beer will impact public safety is not desired by most of the neighbors, by far. In fact, most people hadn't found out till just recently, even though the plan had been in the works for years.