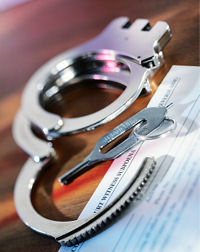 May 22, 2012 (Santee) – On May 16, Santee Patrol Deputies arrested Dylan Castle, 20, of Lakeside in the 9400 block of Carlton Oaks.  He had escaped from a marked patrol unit the night before, after an arrest for possession of narcotics and drug paraphernalia just one block from where he was later apprehended again.
While taking Castle into custody initially, the arresting deputy suffered a minor injury and stopped by the Santee Fire Station to have his injury examined prior to transporting Castle to jail.
“At this time, it is believed Castle, who was seated in the rear of the patrol vehicle, was somehow able to slip his handcuffs from behind his back to the front. He reached his arms through the rear window and opened the car door. Castle then ran from the vehicle,” said Sgt. Tom Poulin.
After receiving treatment for his injury, the deputy returned to his vehicle. Believing Castle was lying in the backseat of his vehicle, the deputy drove to the San Diego County Jail. While en route downtown, the deputy realized Castle was no longer inside the car.

Sheriff Deputies and San Diego Police Officers searched for Castle throughout the night. He was apprehended without incident.