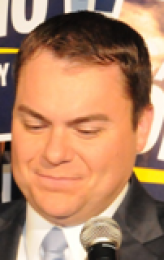 An open letter to DeMaio also sent to media states, “Our decision is based on your long history opposing law enforcement, including voting twice to eliminate death benefits for the families of police officers slain in the line of duty.”

The letter, signed by DSA president David Leonhardi, notes that as recently as last November, DeMaio opposed a ballot measure to provide disability benefits to officers who were injured in the line of duty so severely that they could not return to work.

He adds, “We are establishing a website to get the word out about your failed record: AnybodyButCarl.com.”

The opposition is not partisan.  Both Hunter and DeMaio are Republican. Moreover, the DSA has almost always endorsed Republicans and was the largest donor to the local Republican Party in the last election cycle by a radio of 2.5 to one, according to Leonhardi.

The letter goes on to chide DeMaio for running in “a district where you don’t live and have probably never visited”, then concludes with a question for DeMaio, a conservative local radio talk host, “Are you aware that the FCC precludes you from using the public airwaves to promote your campaign for congress and to bully your opposition?”