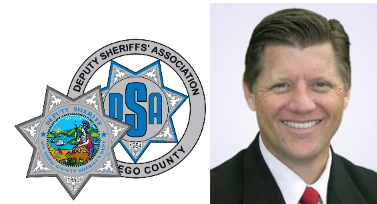 East County News Service
November 5, 2019 (San Diego’s East County) -- The Deputy Sheriffs’ Association of San Diego County (DSA) has endorsed State Senator Brian Jones for Congress in the 50th District. Jones is one of three Republicans challenging indicted Congressman Duncan D. Hunter.
In August the DSA took a position in opposition to Carl DeMaio's candidacy but did not endorse a candidate in the race.
“Brian Jones has been a good friend and leading supporter of law enforcement throughout his time in local office and as a member of the State Assembly and the State Senate,” DSA President David Leonhardi said.
"In addition Brian is the only candidate who lives here, and that's an obvious plus,” Leonhardi added.
Brian Jones responded to the endorsement this way: “There is no group I would rather stand with than the men and women on the frontlines of law enforcement. I pray for their safety every day and feel grateful that so many of our finest have agreed to serve our community as part of this honorable profession.”
Voters have consistently ranked DSA as one of the most popular and persuasive political endorsements in East County and throughout the region.
The Deputy Sheriffs' Association of San Diego County (DSA) represents more than 2,500 sworn deputies of the San Diego County Sheriff's Department, on patrol and in our county detention facilities and courts.