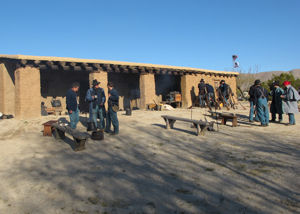 March 1, 2012 (Julian) -- Imagine making a brutal desert crossing on a San Diego-bound stagecoach and coming to a station with water, food and the first sign of greenery for miles.  Or marching east across the desert during the Civil War as a Union volunteer from California, determined to reach Arizona or New Mexico to halt invading Confederates.

“This is one of our most interesting events all year, and it’s worth the trip to the desert,” County Parks and Recreation Director Brian Albright said. “Most San Diego County residents don’t realize that Vallecito once hosted thousands of travelers who sought their fortunes out west and a 1,500 man California unit on its way to fight in the Civil War.” 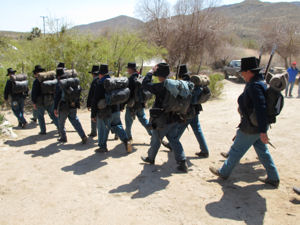 It’s been 150 years since Union army’s “California Column” marched from California to Texas along the well-travelled Southern Overland Trail and stopped to camp at the Vallecito Stage Station. This year’s Vallecito Days commemorates the anniversary with a Civil War infantry squad marching into the station once more and inviting the public to tour their camp at 2 p.m. on Saturday.
Mountain men—independent trappers, hunters and explorers who adventured along the Southern Overland Trail, will also show off their camp.
Vallecito Days will feature tours of the restored Vallecito Stage Station, which was once a bustling stop for the San Antonio-San Diego Mail and the Butterfield Overland Stage service that carried mail and passengers between 1857 and 1861. 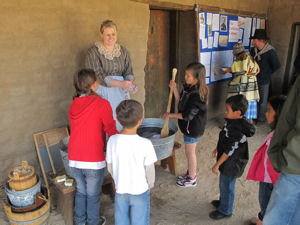 At the weekend celebration, volunteers in period attire will demonstrate frontier cooking, soap making, laundering, archery, fire-starting techniques, surveying, and spinning and weaving.
Exhibits will display antique firearms and other equipment. Folk singer George Maverick will perform throughout the weekend.
Visitors are encouraged to join the fun by dressing in 1850s and 1860s attire.
Vallecito Days is a cooperative effort between San Diego County Parks and Recreation, California State Parks, the Ramona Trails Association, the Save Our Heritage Organization and the local unit of the Backcountry Horsemen of California.  Vallecito Stage Station County Park is located at 37349 Great Southern Stage Route (mile marker 34-35), Julian, 92036.
For more information call Department headquarters at 858-694-3030 or visit www.sdparks.org for a scheduled list of events.