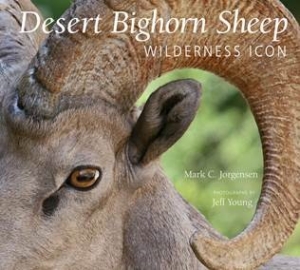 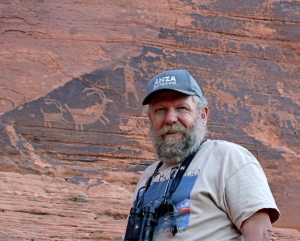 Author Mark C. Jorgensen, the former Superintendent of the Anza-Borrego Desert State Park, helped lead efforts to preserve habitat for bighorn and is an expert on the species.  His writings, along with magnificent photographs by Jeff Young, reveal a deep understanding of and passion for the iconic symbol of our desert region.

“The desert bighorn stands as a symbol of what is wild, remote and foreboding,” writes Jorgensen.” The bighorn has adapted to a realm of the highest temperatures on Earth, in canyons on the scale of the Grand Canyon, in a land of little water, high winds, large stealthy predators, and the ever increasing pressure of humanity. With human foresight, wisdom, and compassion, the bighorn and other wildlife species can continue to roam and thrive in the western wilderness.” 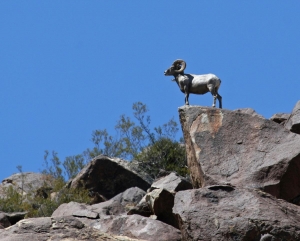 Bighorns once ranged north through Wyoming and into Canada, but no more.  One species, the Badlands bighorn, went extinct and elsewhere some local populations died off due to overgrazing, hunting and loss of habitat. Today all bighorn sheep are confined to 10 southwestern states and northern Mexico; Desert Bighorn have an even smaller habitat confined to the southwest.  Though populations had made comebacks in our region, they are once again under threat from drought, disease, and encroachment into their habitat by developments including industrial-scale energy projects.

An ancient petroglyph, or rock art, depicts Native Americans hunting bighorns in rock blinds, watched over by a shaman.  The Indians used nearly every part of the bighorn.

The photographs in this volume are spectacular; one shows a young ram appearing to dive headfirst off a cliff, but in fact these sure-footed sheep are agile enough to scale a sheer cliff of broken rock—and descend back down again.

A ram will stand guard for up to several hours to assure safe passage for his herd to watering holes below.  The sheep are able to dine on such formidable fare as cholla cactus, avoiding spines while eating the fruity pulp, and ocotillo cacti leaves as well as grasses and other less difficult dining options. A preferred food source is the desert agave stalk, which can grow up to a foot a day.

During the hot summer months, desert bighorn have been documented to live without permanent drinking water sources for months at a time, deriving moisture solely from native vegetation and the sporadic water left by a desert storm. But they can suffer dehydration, in extreme conditions. Once water is found, a thirsty bighorn has been documented to consume over 4.7 gallons of water – or more than 40 pounds! 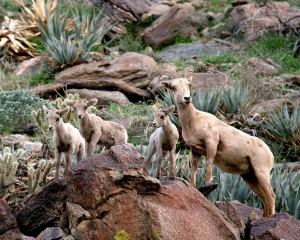 Both male and female bighorns have curved, sharp horns, but a mature male can grow horns up to 40 inches long; his skull can weigh 30 pounds.  In mating season, the loud clash of horns from battling rams reverberates through the canyons they inhabit – action captured in photos in this book.  The sheep also use their horns to open cacti or dislodge spines to gain access to pulp and fruit.  The horns may also protect sheep from coyotes and bobcats, though not the largest desert predator, the mountain lion.

Life is harsh for young desert bighorn lambs, which has only a 25% to 30% chance of surviving its first summer.  Disease including pneumonia and illnesses transmitted from domestic sheep, even on public lands, can decimate herds. Others suffer falls, are struck by vehicles, consume poisonous oleander s planted by humans, or killed by natural predators—even eagles, as well as dogs, or even drowning in pools.

Mountain lions have been documented killing as many as 30 desert bighorn in one two-year period in the Anza- Borrego Desert State Park, however park officials were able to help the bighorn rebound from just 200 sheep left in 1994 to nearly 600 by 2013, with no mountain lion removal.

Elder ewes or matriarchs shepherd their flocks to known water sources and prime feeding areas, helping to avoid dangers along the route.

What can be done to protect these icons of the wilderness?

Jorgensen calls for separation of domestic sheep and bighorn on public lands to prevent spread of disease.

In some areas, water sources have been introduced to help bighorn after development, mining, highways, farming sucked up water or forced sheep out of historical areas where water was more plentiful. Jorgensen states, “Humans owe it to the wilderness to pay back the loss of water sources taken over the past two centuries of settlement and `civilization.’”

Habitat connectivity is critical to survival of the bighorn sheep. Locally, sheep once migrated freely across the border but the border wall has largely cut off access.  Projects such as a 12,000 acre wind energy facility in Ocotillo, multiple desert solar projects, high-voltage power lines, housing developments and golf courses have similarly created obstacles to migration across bighorns’ range.

Jorgensen concludes, “Future projects will need to incorporate our important wildlife resources into the planning process by moving the projects out of vital wildlife movement areas, creating wildlife overpasses to allow for movement and migrations, and concentrating energy developments on rooftops, or closer to the cities where the energy demand is greatest.

But the most important factor is preservation of ample wilderness-quality habitat to assure the long-term survival of bighorns—including restoration of historical habitat areas, such as removing water-sucking tamarisk trees that are non-native.  Bighorn forced to acclimate to urban environments such as neighborhoods near Palm Springs have not fared well, suffering deaths from a variety of human-caused causes, such as from parasites found on golf course lawns.

Ironically, much of the habitat restoration funding for bighorn across the American west has come from license fees paid by trophy hunters.  But Mexico has made “great strides in bighorn recovery” with donations form corporations and private donors, federal and state programs, as well as hunting programs.  Bighorn have even been reintroduced into the Sierra de la Giganta on the Baja peninsula, where they are now reportedly thriving.

The Bighorn Institute, a nonprofit in Palm Desert, has rescued and nurtured more than 125 desert bighorn later released back into the wild since 1985, with permits from state and federal wildlife agencies to do so.

In 2013, an estimated 5,000 desert bighorn remained in all of North America.  The peninsular desert bighorn found in San Diego’s Anza-Borrego desert are listed as endangered species, with perhaps 1,000 remaining. Nationwide, about 31,000 bighorn sheep of all species remain in 7 western U.S. states plus Mexico.

Humans have revered and cohabitated with bighorn sheep for over 10,000 years. Now, Jorgensen concludes, “People have risen up to support sustainable bighorn populations, to restore habitat, and to insure the future of this majestic symbol of wild places.  Their future truly is in our hands.”

My dad was hiking in the Turtle Mountains in the 1970's and found a bighorn skeleton. He took the horns and I think he sold them at a yard sale.