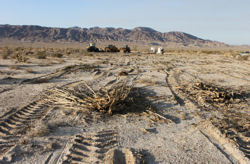 May 25, 2012 (San Diego) -- Today the Desert Protective Council is filing a lawsuit in Federal Court in San Diego to stop the Ocotillo Wind Energy Facility Project (OWEF) from causing damage to fragile desert lands in western Imperial County, adjacent to the Anza-Borrego Desert State Park, the largest state park in the U.S.
The lawsuit, naming the Secretary of Interior Ken Salazar, the County of Imperial, California, and the Project Permittee, Pattern Energy of La Jolla, CA as defendants, alleges that the Secretary violated the right-of-way provisions of the Federal Lands Policy Management Act (FLPMA) when he approved the Project.
The lawsuit further alleges that the Secretary acted illegally when he approved amending the 1980 California Desert Conservation Area Plan (CDCA), and when he ignored the requirements of NEPA to explore all reasonable alternatives and to take into account the cumulative impacts of this project. The lawsuit alleges that Imperial County ignored the requirements of CEQA, as well as County ordinance standards relating to noise intended to protect nearby residents from excessive noise that will disturb their peace and interrupt sleep.
The suit alleges also that both the Secretary and the County failed to take adequate measures to protect the endangered Peninsular Bighorn Sheep and the protected golden eagles that inhabit the 12,400-acre site where the Pattern Energy plans to build 112, 450-ft. tall turbines. The lawsuit asks for an injunction to halt construction of the Project.
The Desert Protective Council (DPC) is a 501(c)(3) non-profit membership organization. Founded in 1954, the DPC’s mission is to safeguard for wise and reverent use by this and succeeding generations those desert areas of unique scenic, scientific, historical, cultural, spiritual or recreational value and to educate children and adults to a better understanding of the deserts.

DPC will be asking the District Court to resolve this matter as soon as possible so that the already started construction activities can be halted in order to prevent additional irreparable damage to natural resources and to the Native American cultural landscape. The California Environmental Law Project of Mill Valley, California represents DPC in this litigation.

The footprint from the Ocotillo project will likely extend thousands of miles beyond its boundaries because of the  slaughter of migratory birds. A Federal environmental impact statement, or “EIS,” is intended to create an open, informed, and public decision-making process that insures “that environmental information is available to public officials and citizens before decisions are made and before actions are taken” and “to help public officials make decisions that are based on understanding of environmental consequences, and take actions that protect, restore, and enhance the environment.” A proper public evaluation has been impossible. This is due to bird and bat mortality impacts that have been hidden from the public for decades with the wind industry's own self serving studies. In addition the current population of the Golden Eagle in California is in a state of decline. This species has already declined around Altamont pass and the estimated population of this species has been grossly exaggerated with again, biased and severely flawed studies. I will remind readers that in Scandinavia a region with a far more wind development and far fewer people, the Golden Eagle is in a very serious state of decline throughout its range. A study was conducted to determine why. This study was not a study at all, it was a cover-up created by the wind industry and their financial backers. In this study it was determined that the decline was most likely due to an increase in tourism and snowmoblie use which was disrupting the eagles nesting cycle. I looked into it and the 20 year decline coincides with the development of wind energy and the migration patterns of the golden eagle. In Finland a country where this so called study took place the population of the country is about 5.5 million or 7 times smaller than in California. The words turbine, wind farm, migration or wind energy were not used once in the 2008 study. The study with is leading conclusions, also does not mention ever seeing any ski or snowmobile tracks near any of the known nest sites. The truth is that Golden Eagle nesting territories are being abandoned because of one or more of the adult eagles never makes it back from their migrations. This same pattern of cover-up, using bogus scientific studies to hide the impacts of the propeller style wind turbine, have been taken place for decades. It is long over due that these patterns of deceit are exposed in the courts and the wind industry held to some accountability.