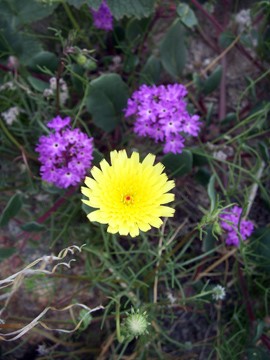 February 13, 2018 (Borrego Springs) – Last year, visitors flocked to Anza-Borrego Desert for a superbloom – the most spectacular wildflower season in memory.  But expectations are wilting for this year’s wildflowers due to lack of rainfall.

Other than one strong storm in January, the desert has had a drier than average season, so very few flowers have germinated. Since the first of the year less than a half inch of rain has fallen in Borrego Springs.

While peak season for desert wildflowers is in March, seasoned wildflower watchers are predicting any more rain wil likely be too little, too late.

The website BorregoWildflowers.com posted on February 12th, “the germination from the rain is mostly gone because of the high temperatures and the lack of additional rain.”  The site notes that while there is still a chance of more rain, it’s “most likely not enough and too late.”  The site predicts this year’s wildflower season will likely be below average to bad.

The Anza-Borrego Desert State Park website states that annual wildflowers are “past their peak at lower elevations in and around Borrego Springs,” where in good years the desert floor is covered in a sea of blooms.  But visitors can still see blooming cacti, shrubs, and trees in the park, as well as blossoming lavender.

The desert wildflower site at DesertsUSA says only a few wildflowers have been seen this season not only at Anza Borrego, but also Death Valley.  “We will need more rain soon for a good bloom this year,” the site posted on February 9th.

At Antelope Valley’s California Poppy Reserve, the hills are mostly brown, with only sparse blooms, the Los Angeles Times reports.

State officials fear a return to dry conditions after last year’s wet winter broke a five-year drought.  The Sierra snowpack is far below normal. Researchers at the Central Sierra Snow Lab in Soda Springs reported the lowest water equivalent ever recorded for the Feb. 11th date, below even the drought years of 2012 through 2015.

Dry weather is also impacting ski resorts in California, particularly those that offer cross-country skiing, unlike downhill runs that can create artificial snow.

If February joins December and January into record-setting dryness, "then California is marching into unprecedented territory, which has never been seen before in the recorded climate history," Steve Johnson, long-range forecaster with Atmospherics Group International, told the Los Angeles Times. Unless March or April bring abundant rains, he predicts, “This rainfall season could end up being one of, or possibly THE driest in our climate history."

The same is true in North county, reports the Union Tribune: http://www.sandiegouniontribune.com/communities/north-county/sd-no-desert-flowers-20180214-story.html#nt=oft12aH-2gp2
And yet so many people appear to be in some kind of denial about water supplies. One can see people wasting this ever precious resource everywhere you look. Lush green lawns, liquid gold running over sidewalks and down the gutters. The amount of water is finite, and the exploitation simply cannot continue. We need comprehensive restrictions / rationing now - before it's too late. Think a crisis can't happen here? Take a good look at what's happening in Cape Town, South Africa.

Me and my son went to Coyote Canyon to see the bloom and had a great day trip to the desert. Beautiful weather with mild temps and clear skies. We saw former motocross rider Ryan Hughes riding his mountain bike. He said he was surprised to see hundreds of cars driving through the area.