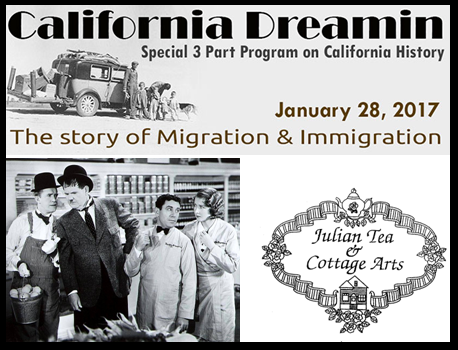 Plus, we’ll tell you about coming attractions including Laurel and Hardy night in Spring Valley, a California’ dream series on immigration and migration in Borrego Springs, a mountain bike ride in Mission Trails, a powwow at Cuyamaca College, Valentine’s Teas in Julian, and a Salute to La Mesa’s Local Heroes.

Lamplighters Theatre in La Mesa will present “What the Butler Saw,” a classic British farce opening January 20th and running through Feb. 19th.

When a psychiatrist tries to seduce an aspiring secretary, his botched efforts lead to comic bedlam involving his insatiable wife, a randy bellhop, a befuddled police officer and Sir Winston Churchill. For tickets and details you can visit www.LamplightersLaMesa.com.

Each year, over 300 aspiring writers from around the world attend the San Diego State University Writers’ Conference. This year, the conference will be held January 20th through 22nd at the San Diego Marriott in Mission Valley.  The conference was the first to pioneer one-on-one appointments for writers with editors, agents and other top-tier publishing professionals, who can provide direct feedback on your writing.

For information on fees and registration for the 33rd annual SDSU Writers Conference, visit NeverStopLearning.net/writers.

You can meet author Roger Conlee at the Alpine Library (1752 Alpine Blvd.) on Saturday January 21 at 10 a.m.  He has written seven fact-based historical novels, including several that have won awards. The latest is Deep Water, set in the early days of the Cold War and the red-baiting hysteria of the McCarthyism era.

Young Actors Theater will host cabaret nights on Friday and Saturday, January 27th and 28th at the YAT theater in Spring Valley.  The cabaret nights showcase talented YAT members performing musical, dance and acting performances to benefit the theatrical group.  For tickets ($10) and details you can visit  www.YATSanDiego.org.

CALIFORNIA DREAMIN’: THE STORY OF MIGRATION AND IMMIGRATION JANUARY 28

The Anza Borrego Desert Natural History Association will present a three-part program titled “California Dreamin’” on the story of migration and immigration.  All three parts will be presented on Saturday, January 28th and will encompass the history of the early Californians, Western women, and the impacts of immigration on Native Americans.

Saps at Sea, the local Laurel & Hardy fan club, begins its 39th year with a meeting on Saturday, January 28 at Williams Halls at Trinity Church in Spring Valley. Doors open at 6:30 p.m. and the show starts at 7:00 p.m.

The evening includes showings of the cartoon “Screwball Squirrel,” followed by Laurel and Hardy causing mischief in “You’re Darn Tootin’” with live music by Russ Peck and comedian Charley Chase in “Snappy Sneezer.”  After an intermission and treats, you’ll see “Them Thar Hills” and “Tit for Tat,” two more Laurel and Hardy short films, the latter nominated for an Academy Award.

The largest outdoor ice skating rink in Southern California is open at Viejas Outlets Center through January 29th. Feel the cool Pacific mountain air on your face while you bunny hop, camel spin, and swizzle your way around our ice rink in Alpine.  For details, you can visit www.Viejas.com.

The Native American Student Alliance at Cuyamaca College will host its 3rd Annual Powwow on Saturday, February 4th from 10:30 a.m. to 8 p.m. in front of the Communication Arts complex. The powwow aims to promote Native American heritage, with activities including Bird Singing, a native singing style of the Kumeyaay people honoring the culture and traditions of local tribes in our region.

The powwow will also include arts and craft vendors, food vendors, drums, native dances and more. Admission and parking will be free.

Mission Trails Regional Park invites you to a guided Mountain Bike Nature ride with a park ranger on the first Saturday of the month now through June from 9 to 11 a.m.

The next ride will be on Saturday, February 4th, starting at the West Sycamore portion of the park at the east end of Stonebridge Parkway in Scripps Ranch. You may see birds of prey rising on the winds from canyons below as you ride through Beeler Canyon. This 10-mile ride is for moderate to fit riders.

If you arrive early, volunteers from San Diego Mountain Biking Association will help you make adjustments to your bike. Upcoming rides’ difficulty will increase a little so you can try new skills and get comfortable with your bike. Be sure to bring plenty of water, sunscreen and snacks. Wet trails cancel rides. For more information, visit the Mission Trails Regional Park website at www.MTRP.org.

Acoustic guitarist, singer and songwriter Jim Earp will perform Hawaiian and Celtic guitar music, as well as folk-rock songs at the San Pasqual Winery Tasting Room and Gallery in La Mesa on Saturday, February 11th from 7 to 10 p.m.  Wine and cheese are available for the performance in the winery’s cozy back room.  For details or to get a full February schedule of events at this venue, you can visit www.SanPasqualWinery.com.

Julian Tea and Cottage Arts will host Valentine’s Teas from February 9th through 14th, with several options for seating times.

The set menu is a romantically inspired version of their Cottage Classic Tea, a four course extravaganza starting with tomato or pumpkin soup with mini cheese scone, then a variety of finger sandwiches and savories, followed by a scone with curd, jam and whipped cream, and the grand finale is a luscious three-piece dessert tray.

A Children’s Tea is also available for children under 12. Vegetarian or gluten-free versions can be prepared with advance notice. For reservations, visit www.JulianCa.com and click on the calendar.

The La Mesa Chamber of Commerce will host its 9th Annual Salute to Local Heroes dinner on February 22nd from 5 to 8:30 p.m. at the Town and Country Resort’s Golden Ballroom in Mission Valley.  The Chamber will honor heroes chosen by the La Mesa Police Department and Heartland Fire Department.  This year’s event has an “All That Jazz” theme and includes a silent auction and raffle.  For tickets and details visit www.LaMesaChamber.com.