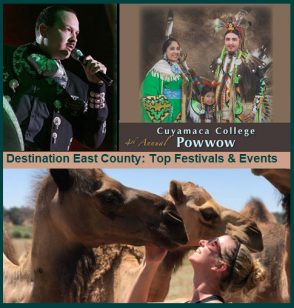 So stay tuned for all of these events and many more!

Pepe Aguilar will perform live in concert at the Viejas Arena at San Diego State’s Aztec Bowl on January 28th at 6:30 p.m.

The American born singer and songwriter raised in Mexico started singing on stage at three years old and he’s never left.  The son of Mexican music and film stars Antonio Aguilar and Flor Silvestre, he attained stardom in his own right with an album of romantic ballads in 1998. Since then, he’s embraced traditional Mexican rancheria and mariachi music as well as pop music – a style that has won him multiple Grammy and Latin Grammy Awards and sold over 12 million albums.

Tickets are available at http://viejas.arenasandiego.com/.

THE MOUSETRAP AT LAMPLIGHTERS THEATRE CONTINUES NOW THROUGH FEB. 4

A terrible snowstorm traps a group of strangers in a quaint boarding house. To everyone's horror, it soon becomes clear that a murderer is hiding among them. This thrilling whodunit by Agatha Christie, author of so many classic English murder mysteries, is known for its unpredictable ending ... Can you pinpoint the murderer before the characters do?

The original production of The Mousetrap on London's West End has now been running continuously for 61 years, during which period it's been performed more than 25,000 times, making it the most popular whodunit of all time and the longest-running show of any type in the modern era

For tickets and details, visit www.LamplightersLaMesa.com.

HAWK WATCH AT RAMONA GRASSLANDS EACH SATURDAY IN JAN. AND FEB.

Guests are advised to arrive a half hour early for parking, bring binoculars, and enjoy coffee and doughnuts before viewing the raptors that make their homes in the Ramona Grasslands. For more information, you can visit http://www.wildlife-research.org/.

Saps at Sea, the local Laurel & Hardy fan club, present their 40th Anniversary SAPS Funtastical gathering of films and food.  Doors open at 6:30 p.m. at Williams Hall at Trinity Presbyterian Church in Spring Valley with the show starting at 7 on January 27.

The program includes a silent film with live music by Russ Peck, a hilarious cartoon and more. Plus, the Saps will give you a surprise look at some special events and guests greeting the Saps this year! Start the 40th year off in a hilarious way.

The El Cajon Library will host its third Local Author Expo on Sunday, January 28, at 2:00 p.m. featuring presentations by three local authors and a reception afterwards where attendees may meet the authors, buy books and enjoy refreshments.

The authors featured include Wanijiru Warama, a La Mesa resident and author of Unexpected America, a memoir of her experience coming to America after growing up as the daughter of peasants on a farm in colonial Kenya.

Roger Conlee, a former reporter for the San Diego Evening Tribune, has authored seven historical novels including his latest, Deep Water, a political thriller that takes place during the early days of the Cold War.

Mean Mary will be live in concert on February 2 at 7 p.m.  at the Summit Universalist Unitarian Fellowship in Santee. The artist is an Americana, bluegrass, blues, and folk artist based in Nashville, stopping here on her “Blazing Tour” through Southern California.

Mary read music before she could read words and was proficient on guitar, banjo and fiddle by age seven, according to a bio provided by Summit. She is known for her lightning-fast fingers, haunting vocals, and intricate story songs.

The church is located at 8778 Cottonwood Ave. in Santee. Doors open at 6:30. For more information, visit  www.SummitUUF.org.

The Native American Student Alliance (NASA) at Cuyamaca College is hosting its 4th Annual Powwow 10 a.m.-8 p.m. Saturday, Feb. 3, 2018, in front of the Communication Arts complex, Building B. The powwow aims to promote Native American heritage, with a variety of activities, including Bird Singing, a native singing style of the Kumeyaay people honoring the culture and traditions of the local tribes of this region.

Cuyamaca is an adaptation of a Kumeyaay phrase, “Ekwiiyemak,” which writers have translated to mean “behind the clouds,” “above rain,” and “the place where the rain comes from heavens.”

No matter the translation, Cuyamaca College's ties to the Native American community and culture are strong, with its location on once indigenous land and its close proximity to many reservations. The powwow will include arts and craft vendors, food vendors, drums, native dances and more.

For directions to Cuyamaca College in the Rancho San Diego area of El Cajon, visit www.Cuyamaca.edu.

INSIDE THE ACTOR’S PROCESS: FEB. 2-3 AT STAGEHOUSE THEATRE

Grossmont College’s Theatre Arts Department will kick off its spring season with its 12th annual Inside the Actor’s Process production, this time focusing on classical theater.

Directed by Benjamin Cole, “Inside the Actor’s Process: Classical” will be offered to the public at the Stagehouse Theatre  on February 2nd and 3rd at 7:30 p.m., plus a matinee performance at 2 p.m. on February 3rd.

The Oak Ridge Boys, who were recently inducted into the Country Music Hall of Fame, will perform on Saturday, February 3rd at 5 p.m. in Sycuan’s Live and Up Close Theatre in EL Cajon. Their four-part harmonies and upbeat songs have won many awards including a Grammy, Country Music Association and American Country Music awards—and they’re still going strong after more than 40 years. For tickets, visit www.Sycuan.com.

A violin and cello concert will be presented by Paivikki Nykter and Cecilia Kim at Mission Trails Regional Park on Sunday, February 4th at 3 p.m. The complimentary concert will be held in the Visitor Center. For directions and details, visit www.MTRP.org.

Grossmont Center shopping mall in La Mesa invites you to “Cupid and Canines” on February 10th from 11 a.m. to 3 p.m.

The San Diego Animal Support Foundation & Grossmont Center are bringing together dozens of rescue groups and shelters featuring hundreds of adoptable dogs and even some cats for this mega Adoption Event inside the mall.

Find purebred breeds from chihuahuas to Great Pyranees, as well as all-American mutts. Everything from Great Pyrenees to Chihuahuas, purebreds to All-American Mutts.  Just in time for Valentine’s Day, you can find your new best friend, or the perfect family pet.

Bruce and Beverly Dorcy with the San Diego Chamber Music Society will perform a concert with piano and horn at the La Mesa Library on February 10th at 1 p.m.  The La Mesa Library (8074 Allison Avenue) hosts free concerts on the second Saturday each month, thanks to support from Friends of La Mesa Library.

You’re invited to bring the family to open farm day at the Oasis Camel Dairy in Ramona on February 10th and 11th from 1 to 4 p.m., with a live animal show at 1:30 p.m. The show features talking parrots, galloping, gobbling turkeys, dedicated farm dogs and of the biggest stars – camels!

You can also feed treats to camels, cuddle with camels, shop for camel’s milk soaps and lotions, take crazy camel selfies or ride a camel. For details, visit www.CamelDairy.com.

VALENTINE DINNERS AT JEREMY’S ON THE HILL FEB. 10-14

Jeremy’s on the Hill in the Julian area will be serving up four-course Valentine’s dinners paired with local wines on February 10th through 14th.

This romantic feast begins with ceviche and your choice of lobster bisque or a salad topped with ripe fruits, followed by a choice of salmon, duck or steak entrees. The meal concludes with a bananas foster vanilla layer cake with chocolate espresso sauce and chai tea whipped cream.

If you come on the 10th, 11th or 12th, you can also enjoy live music:  classical guitar, piano and acoustic guitar respectively. For all the delicious details, or to make a reservation for you and your valentine, you can visit www.BestRestaurantInJulian.com.

VALENTINE’S TOUR: LOVE FOR SEX IN THE GARDEN: FEB. 17

On February 17th, the Water Conservation Garden invites you to a Valentine’s Tour titled “Love for Sex in the Garden.”

Think humans work hard at finding a partner? You’ll be astounded at the creativity, deceit, competitiveness and even murder that plants attempt to achieve pollination.

Bring your sweetheart and celebrate nature’s creativity with Tour Guide Rosalie Dosik – the self-described Dr. Ruth of the plant world plus chocolate for all who attend.  This PG-rated tour is based on the book “Sex in The Garden.”

The ensemble’s music celebrates the history of negro spirituals, aspiring to be inspirational and uplifting.  For more information, you can visit the musical group’s website at MLKCCSD.org.

View the Andromeda galaxy, the Orion Nebula and other celestial sights during a Star Party at Mission Trails Regional Park on Saturday, February 17th from 5:30 to 8:30 p.m. Amateur astronomer and trail guide George Varga will have a telescope available for viewing the night sky at the far end of the Kumeyaay Lake Campground’s day use parking lot. Learn more at www.MTRP.org.

Amy Lynn Kanner will perform a Celtic harp concert at the Mission Trails Regional Park Visitors Center auditorium on Feb. 18 at 3 p.m. The performance will feature Pachelbel's "Canon" and Debussy's "Clair de Lune," and Praetorious' "Terpsichore." The program also features popular music like "Somewhere Over the Rainbow," "A Thousand Years," "Stairway to Heaven," and more.

Learn tips for attracting pollinators such as bees, hummingbirds and butterflies to your garden at La Mesa Beautiful’s annual meeting on February 18 from 4 to 6 p.m. at Nan Couts Cottage, 5045 Memorial Drive, La Mesa.

Marcia Van Loy, a volunteer with the Master Gardener Association for 17 years, will be the speaker. A home gardener for over 35 years in the Clairemont area, she has coordinated their Town Council’s annual garden tour many times and is a popular speaker who has shared her depth of knowledge with many regional gardening organizations. Growing plants for all types of pollinators in her hillside garden is one of Loy’s favorite subjects to share with others.

Her garden is a Certified Wildlife Habitat, a Certified Earth Friendly Garden and was featured in the San Diego Home and Garden Magazine’s April 2013 edition. And, after many years of collecting rustic birdhouses, she now teaches Master Gardeners how to build them as a way to raise funds for their educational programs.

The program is open to the public. Refreshments will be served.

Young Actors Theatre will present “Seussical, the Musical” at the Encore! Theatre in the Casa de Oro area of Spring Valley (9260 Campo Rd.) from February 22 through March 4th.  This musical production brings to life your favorite Dr. Seuss characters, from the Cat in the Hat to Horton the Elephant.  For tickets, visit www.YATSanDiego.org or call (619) 670-1627.