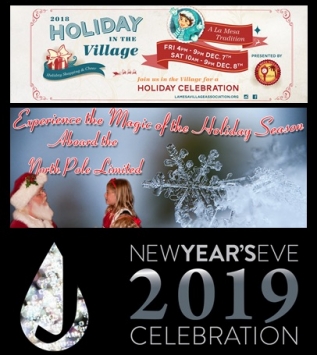 Plus, there are some non-holiday happenings this season including concerts by such stellar performers as Fleetwood Mac, LeAnn Rimes, Barry Manilow, Tony Orlando and the Kingston Trio, a radio production of It’s a Wonderful Life, and a comedy  appearance by Trevor Noah.

So scroll down for all of these events and more!

The 23rd annual Alpine Village Parade of Lights and Snow Festival offers Santa, snow sledding and fun for the whole family on December 7th. The parade begins at Alpine Blvd. and West Victoria Drive at 6 p.m. and ends at the Alpine Creek Town Center, 1347 Tavern Road in Alpine.

Organized by the Alpine-Mountain Empire Chamber of Commerce, the parade features floats and other entries all aglow with holiday lights.  The snow festival features real snow with a sledding hill as well as vendor booths, children’s activities and more.

For more information, or to sign up to enter December 7ththe parade by Dec. 5, visit www.alpinechamber.com

HOLIDAYS IN THE VILLAGE DEC. 7-8

The La Mesa Village Association will present Holiday in the Village December 7th and 8th.  You’re invited to stroll through the streets of La Mesa’s historic downtown to enjoy live music and dance, cozy fires, craft vendors, food, and a kids' area with holiday movies and activities.

There will also be fire pits, caroling and more in the spirit of the season.

Fleetwood Mac, one of the world’s best-selling bands, will be live in concert at the Viejas Arena at San Diego State University on December 8th at 8 p.m.

The stellar British rock group known for hits such as Black Magic Woman, still includes its two original title members, Mick Fleetwood and John McVie, along with some new talent.  The band has sold over 100 million records worldwide as well as an Emmy award and induction into the Rock and Roll Hall of Fame since its inception 50 years ago. For tickets, you can visit Ticketmaster.com.

BREAKFAST WITH SANTA DEC. 8 IN ALPINE

You’re invited to bring the kids and savor breakfast with Santa at the Alpine Community Center (1830 Alpine Blvd., Alpine) on Saturday, December 8 from 9-11 a.m.

Every child will receive a gift from Santa! There will also be holiday crafts for kids.

The program opens with Charles Gounod's Saint Cecilia Mass, written in honor of the patron saint of music, St. Cecilia. The second half of the program features a selection of seasonal music ranging from traditional carols to new settings of old favorites to some less familiar Christmas songs.

For tickets and details, you can visit www.SanDiegoFestivalChorus.org.

Noah’s Homes in Spring Valley presents the first-ever Enchanted Village Festival of Trees and Lights, which runs Fridays, Saturdays and Sundays from December 14th through 23rd.

Created by the designer of the Magical Forest in Las Vegas, the Enchanted village Festival features an array of illuminated Christmas displays as well as carolers, a choir, Santa’s Workshop.

But the real magic here isn’t only the sparkling lights at the Enchanted Village.  It’s the wonderful work done year-round by Noah’s Homes,  a nonprofit residency facility for disabled adults that helps to foster lifelong independence, dignity and respect.  For tickets, visit https://www.enchantedvillage.org/.

The famous North Pole Limited returns to celebrate the holiday season at the Pacific Southwest Railway Museum in Campo. Aboard the historic 1920s train, Santa’s elves will sing Christmas carols, read a popular holiday story, passing out cookies and hot chocolate to all—then stop at Santa’s workshop to pick up Santa and Mrs. Claus.

Advance tickets are recommended as this popular attraction often sells out.  Arrive at the Campo depot at least 45 minutes early – and be sure to stop by the Hobo Camp next to the depot to hear tales from railroading’s pass before boarding.

IT'S A WONDERFUL LIFE: A LIVE RADIO PLAY CONTINUES THROUGH DEC. 15

The production recounts the classic story of George Bailey’s Christmas Eve, when the depressed man is visited by a guardian angel who shows him the lives he has touched and then shows him how different his community of Bedford Falls would have been without him.For tickets, visit www.PickwickPlayers.net.

Singer Barry Manilow will present a “Barry Merry Chirstmas” concert December 13th at 7:30 p.m. at the Viejas Arena at San Diego State University.  The winner of a Grammy Award and a Tony Award for Broadway appearances, Manilow began his career singing duets with Bette Midler and jingles for McDonalds commercials before gaining fame as a solo performer. He is best known for hit songs such as Mandy, I Write the Songs and Copacabana.

The youngest singer to win a Grammy and also be nominated by the Academy of Country Music, LeAnn Rimes will be live onstage at Oak Ballroom stage at Viejas Casino & Resort on Friday, December 14 at 8 p.m. With a string of hits throughout her career, she is still best known for her signature song “Blue”.

For tickets and details, visit Viejas.com and click on the entertainment option.

Comedian and author Trevor Noah brings his Loud & Clear tour to the Viejas Arena at San Diego State University on December 15th. The host of Comedy Central’s “The Daily Show with Trevor Noah” known for his humorous take on politics is also the author of “Afraid of the Dark” and “Born a Crime,” his memoir; the title references his birth to mixed raced parents in South Africa, a crime under apartheid rule at the time. For tickets, visit Ticketmaster.com.

The Jamul Casino will be ringing in the New Year with a New Year’s Eve Party December 31st that starts at noon and continues until 2019 arrives. Options include a New York-style dinner at the Prime Cut steakhouse, or a lobster and prime rib buffet at the Tony Gwynn Sports Bar, plus DJs and live entertainment until 1:30 at Tony Gwynn’s, the Jive Lounge, and the Loft 94 beer garden.

The largest outdoor ice skating rink in Southern California is open now through January 6th at the Viejas Outlets Center in Alpine. Rental skates are available.  In addition to ice skating, visitors can enjoy holiday entertainment and a seasonal water show.

Saps at Sea, the San Diego chapter of the Sons of the Desert, the official Laurel & Hardy fan organization, invites you to their last meeting of the year on December 29 at 7:00 p.m. (doors open at 6:30 p.m.) at Williams Hall at Trinity Presbytarian Church in Spring Valley.

Starting out with a Mickey Mouse cartoon, the Saps will celebrate Mickey’s 90th birthday.

The special short is “Big Business” (1929) with another lively music score by the Saps' own Russ Peck at the keyboard.
The Saps will celebrate the time of year with one of Laurel and Hardy fans' favorite films “Babes in Toyland” (1934), also known as “March of the Wooden Soldiers.”
This month's guest film comedians are Jackie Gleason & The Honeymooners.
For more information, visit the Saps at Sea Facebook page.
That’s all for this week! You can find details on all of these events and more in the calendar and events section at our website, www.EastCountyMagazine.org.