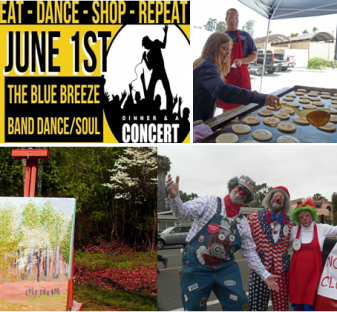 Plus we’ll have a preview of coming attractions including Lavender Day at Summers Past Farms, Fido Fest in Santee, a firefighters pancake breakfast in La Mesa, the San Diego Concert Band in La Mesa, a Taste of La Mesa, Art in the Park in La Mesa’s McArthur Park, Santee’s summer concerts, the Jamul Wine Tasting Festival, a historic quilt show, Santee Salutes and Julian’s Fourth of July parade.

El Cajon’s Dinner and a Concert series continues on Friday, June 1 with a performance by Blue Breeze Band playing dance and soul music.  The program runs from 6 p.m. to 8 p.m. at Prescott Promenade Park.

Guests can bring a picnic to eat on the lawn or arrive early to dine at one of the local restaurants downtown. For details visit www.DowntownElCajon.com.

The City of La Mesa will present a Salute to Old Glory at its annual Flag Day parade on Saturday, June 2nd down La Mesa Boulevard in the La Mesa downtown village.

St. Madeleine Sophie’s Center (2119 East Madison Ave.) will hold its inaugural Our Secret Garden Party on Saturday, June 2 from 4:30 to 8:30 p.m. at the facility’s beautiful garden and new aquatics center in in El Cajon.

NOW PLAYING: MOVIES IN THE PARKS

County Parks and Recreation will present 151 movies in parks across our region all summer long.  Showings start 15 minutes after sunset and movies are rated G through PG-13.

Movies playing at East County locations early in the season include the Lego Ninjago Movie at Stelzer Park in Lakeside (11470 Wildcat Canyon Rd.) on June 2nd.

Summers Past Farms in Flinn Springs invites you to Lavender Day on Saturday, June 9th from 9 a.m. to 3 p.m. to celebrate the fragrance and beauty of lavender.

There will also be an antique and craft fair with over 40 fine craftsmen and expert artisans. You can also shop in the barn for lavender gifts such as lavender soaps, candles and salves, bring home containers of live lavender plants and picnic while listening to talented musician Jim Earp.

Guests are encouraged to wear lavender.  For details, visit www.SummersPastFarms.com.

The city of Santee is going to the dogs – and invites you to Fido Fest on June 9th from 9 a.m. to 1 p.m. The event will be held at Town Center Community Park East (550 Park Center Drive) in Santee.

Fido Fest will feature dog adoptions, exhibitors, giveaways, demonstrations, live entertainment and a silent auction to benefit Dogs on Deployment, which helps deployed military members find volunteers to board their pets while they are away.

There will also be services for pet owners including vaccinations, microchipping, dog licensing, heartworm and flea preventative measures.

Dogs attending must be well behaved and on leashes, current on vaccinations, and ready to have a good time with lots of tail-wagging fun.

The Julian Dance and Back Country BBQ will be held June 9th from 12 noon to 9 p.m. at the Menghini Winery in Julian. This outdoor event in its 12th year is the brain-child of the Sons of the American Legion to raise funds for Veterans, kids, local schools and other charitable organizations in the community.

The dance features country music and dancing on a huge floor and stage.  A delicious barbecue is cooked on-site on an open oak flame. There are also separate events for kids.

All in a beautiful mountain setting, the “Dance” is a throwback to a simpler time with twinkly lights and bonfires back-dropped by dark mountain skies. It’s an event where locals and guests from down the hill get together for a great time and raise funds for a great cause.

For tickets and details, visit http://juliandance.org/.

ART IN THE PARK JUNE 10 IN LA MESA

Foothills Art Association invites everyone to enjoy “Art in the Park”,  an art show and sale at MacArthur Park (4975 Memorial Drive) in La Mesa on Sunday, June 10 from 11 a.m. to 4 p.m.

Many local artists will be displaying and selling their artwork during a festive day in La Mesa’s newest community park. See the art, listen to the music, bring a picnic lunch, and enjoy a family day at MacArthur Park on the site of a former golf course now dedicated as a public park.

On Sunday, June 10, Heartland firefighters of La Mesa will present a pancake breakfast fundraiser at La Mesa Fire Station 11 (8034 Allison Avenue). The event, suitable for all ages, will be held from 8 a.m. to 12 p.m.

Funds from the event will be donated to benefit the Heartland Fire Explorers Program. Tickets can be purchased at the door the day of the breakfast.

The San Diego Concert Band has announced its 29th annual Spring Celebration concert and summer concert series. The next East County location will be June 10th at 6 p.m. at Harry Griffen Park in La Mesa.

Tickets can be purchased online at www.sandiegoconcertband.com, or at the door if not sold out.

The La Mesa Chamber of Commerce will host the 10th annual “Taste of La Mesa” on Monday, June 11th from 5 to 8 p.m. at the La Mesa Community Center.  The event features samples of foods, wines, and beers from dozens of local restaurants, wineries and breweries.

Guests can also mix and mingle with local businesses who have display tables for attendees to visit.

For tickets and details, you can visit www.LaMesaChamber.com.

Most concerts run from 6:30 to 8 p.m., but several special events start earlier.

The June lineup includes the Cadillacs on June 14 playing vintage classic rock and roll plus a car show starting at 6:30. On June 21st, the fun starts at 5:30 with country night, and on June 28th, Upstream will perform reggae music starting at 6:30 p.m.

For a full lineup of concerts and other Santee happenings, visit the City of Santee’s website calendar (http://cityofsanteeca.gov/home/showdocument?id=15579).

All proceeds will benefit Jamul’s St. Pius X parish improvements and youth programs. For tickets, visit St.PiusXJamul.com. This event is limited to those age 21 and up.

For 27 years, the Julian Woman’s Club Heritage Quilt has showcased the talents of local quilters. This year’s show will feature newly made and heirloom quilts on display. The show runs from June 29th to July 4th in the Julian Town Hall upstairs from 10 a.m. to 4 p.m.

You can vote for your favorite quilt, purchase quilts and hear from quilting expert and author Eleanor Burns.