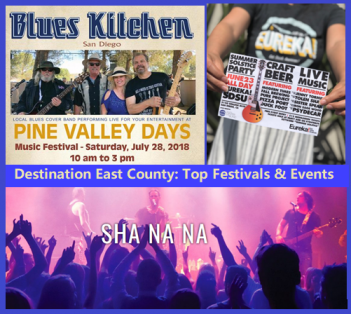 The Eureka! SDSU restaurant (5140 College Ave.) is helping guests kick off summer with a Summer Solstice Party on Saturday, June 23 from 11 a.m. to 10 p.m.

The fun includes an outdoor music fest and beers from five craft breweries  For tickets you can visit EventBrite.com and type in Summer Solstice Eureka SDSU.

The San Diego East County Chamber of Commerce invites you to join in the Passport Through Time fun ride on Saturday, June 23 along Historic Highways 67, 78, 79 and 80 in San Diego’s East County.  Cars, motorcycles and other vehicles are welcome to participate in stops along the way that include a camel dairy, an herb farm, rodeo grounds, shops, restaurants and more.

The outing also includes breakfast, lunch and an opportunity drawing. TO RSVP call 619-440-6161.

Alpine will celebrate its honey history at the 2nd Annual Queen Bee Brunch on Saturday, June 23rd, which promises to “bee” a special party. Complete with a fashion show, vendors and mimosas, the brunch is presented by the Alpine Mountain Empire Chamber of Commerce and the Alpine Community Center.

LA MESA CONCERTS IN THE PARK

La Mesa’s Sundays at Six concert series continues this Sunday with  Rachel Aldous and the Road home playing swing, bluegrass and jazz music. The concert will be held at Harry Griffen Park from 6 to 7 p.m.

For a full schedule of upcoming concerts, visit the city’s website (http://www.cityoflamesa.com/409/Events-Activities.)

EL CAJON MOVIES IN THE PARK

The city of El Cajon’s Recreation Department invites you to enjoy  free Summer Movies in the Park.  The next showing will be Lego Batman at Wells Park (1553 East Madison Ave.) on Saturday, June 23rd.

Come early for pre-movie activities. Screenings start at dark. For information on more El Cajon movies in the park, you can visit the city’s recreation department website at www.ElCajonRec.org.

Sha Na Na debuted in the ‘50s, performed at the now legendary Woodstock festival, in the movie Grease, and on their own Sha Na Na TV show. Founded by students at Columbia University in New York, the band has continued through the years with new members from Columbia joining three of the original band members still on tour.

On June 29th, Sha Na Na brings its distinctive sound to Sycuan’s Live & Up Close theatre for a live performance at 8 p.m. For tickets, you can visit www.Sycuan.com.

EL CAJON DINNER AND A CONCERT

El Cajon’s dinner and a concert series continues on Prescott Promenade each Friday night. The next two concerts will be the Verge playing classic rock on June 29 followed by a Santana Tribute by Santana Ways on July 6th.

Concerts start at 6 p.m. Bring a picnic, or arrive early to dine at one of the many restaurants downtown. For a full schedule visit http://downtownelcajon.com/

All proceeds will benefit Jamul’s St. Pius X parish improvements and youth programs. For tickets, visit StPiusXJamul.com. This event is limited to those ages 21 and up.

The Lake Murray Fireworks and Music Fest will celebrate Independence Day on July 4th from 11 a.m. to 9 p.m. with live bands, food, fun, and a fireworks finale.  The festival will be held on the San Carlos side of Lake Murray, but the full lake will be open during the day for fishing and other family-fun activities.

For more information, you can visit www.LakeMurrayFireworks.org.

The 49th Annual Descanso Days Parade and Fair takes place on Saturday, July 7th.  The Fair is held at the historic Descanso Town Hall on Viejas Grade in Descanso. The parade rolls out in front of the town hall starting at 10 a.m. – but arrive early, since the road closes at 9:30 a.m.

This year’s theme is “Dog Days of Summer” and will include Paws for Purple Hearts, which trains therapy dogs for veterans. There will also be country music from noon to 5 p.m. by Hill Country, food, beer and wine, vendor booths, a kids’ area with face painting and crafts, and plenty of good times.

For a full schedule of events, you can visit https://pinevalleydays.com.

Saps at Sea, the San Diego section of the official Laurel & Hardy fan organization, the Sons of the Desert, presents their 40th Anniversary Spectacular on Saturday, July 28 starting at 7:00 p.m. with the doors opening at 6:30 p.m. at Williams Hall at Trinity Presbyterian Church in Spring Valley.  (A $7 donation is requested.)  The organizers are promising an "ocean of laughs" with a special program of film favorites and some new delights.

The Saps will screen Hog Wild.  Then, The Little Rascals star in Hi'-Neighbor! (1934). After intermission with cake and ice cream, Hal Roach book author and historian Craig Calman returns to talk about the man that brought Laurel & Hardy together.Copies of his books and 40th anniversary T-shirts will be available for sale.

Then, the Saps will screen their namesake, Saps at Sea (1940).  For more information, visit the official Saps at Sea Facebook page.

That’s all for this week! You can find details on all of these events and more in the calendar and events section at our website, www.EastCountyMagazine.org