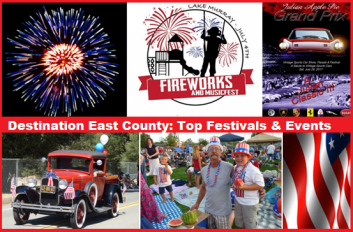 We also have a preview of coming attractions including Descanso Days, the Pine Valley Parade, astronomy on Mt. Helix, music superstars Lionel Ritchie and Mariah Carey coming to San Diego State, and a murder mystery dinner theatre in Julian.

Elvis tribute artist Scott Bruce will shake, rattle and roll with your favorite Elvis Presley songs on Friday night, June 30th from 6 to 8 p.m. in downtown El Cajon. It’s all part of the Dinner and Concert series all summer long in Prescott Promenade Park.  You can bring a lawn chair and picnic to enjoy dining outdoors before the music begins, or arrive early to dine at one of downtown El Cajon’s numerous restaurants. For a full lineup of artists visit www.DowntownElCajon.com.

On Saturday July 1st, the Rancho San Diego Library will host an early independence weekend celebration from 11 a.m. to 1 p.m.

This family-friendly celebration will include classic elements of idyllic American picnics such as music, games, refreshments and crafts, plus story time with Miss Rancho San Diego as well as performances by Sparkles the Clown and the folk band Trails and Rides.

There will also be booths, crafts and kids’ games as well as a half-price book sale by Friends of the Rancho San Diego Library, plus a kick-off to the library’s summer reading challenge.

If you want to start celebrating Independence Day weekend early, Viejas Casino and Resort invites you to a Freedom Festival on July 2nd from 7 to 9 p.m. You’re invited to celebrate the American spirit with live music and cuisine from around the country at the hotel pool, followed by a fireworks show over the park at Viejas.

For details, you can visit Viejas.com.

After several years on hiatus, the beloved San Diego Lake Murray Music Fest and Fireworks show is coming back on July 4th from 11 a.m. to 10 p.m., with the fireworks show at 9 p.m. The music fest is held at Lake Murray Community Park in San Carlos (5540 Kiowa Drive, La Mesa, off Lake Murray Blvd.).

The day of fun includes food vendors, fun, bands and fireworks.  Bands range from a Beatles tribute to classic rock. The fireworks can be seen throughout the Navajo community, from La Mesa to Del Cerro and beyond. Food will be provided by Kiwanis (hotdogs and hamburgers), Admiral's Restaurant with Geoff Cole, Rita's Italian Ice, Bullseye Kettle Corn, Windmill Farms, Los Primos, and Inferno Woodfired Kitchen.

Get full details and a full schedule of bands at https://www.lakemurrayfireworks.org/.

Julian proudly proclaims its annual 4th of July parade to be the best small-town parade in America.

The parade starts with the firing of a cannon and also includes earlier flyovers by vintage aircraft, a gunfight and bank robbery staged by the Julian Doves and Desperados from 10 a.m. to 12 noon., as well as unfurling of a giant flag.

The parade itself starts at noon and includes equestrians, marching bands, bagpipers, floats and more, plus there’s a barbecue and dance at the American Legion as well as drawings for vintage airplane rides, sky sailing and a hand-made quilt displayed at Julian’s town hall.

The city of El Cajon invites you to celebrate Independence Day with numerous games, live musical entertainment and fireworks at the City of El Cajon’s Fourth of July Celebration!  On July 4th, the El Cajon Recreation Department will host the event at Kennedy Park (1675 East Madison Avenue in El Cajon).

From 1 p.m. to 8 p.m. you can enjoy carnival games, an inflatable, a kiddie train and a skate park. Free crafts and family games will be available from 2 to 6 p.m., with music by two live bands from 3 to 9 p.m.  A fireworks show with synchronized music at 9 p.m. will provide a finale to the celebration of our nation’s birthday.

Alpine will celebrate Independence Day with a Fourth of July Parade starting at 10 a.m. along Alpine Boulevard between West Victoria Boulevard and Tavern Road, bringing back a tradition that’s been dormant for years. Everyone is invited to participate or come watch.

The parade’s grand marshals will be Bill Ridenour and Fred Higginbotham, both local World War II veterans now in their 90s who have been instrumental in adding many names of local veterans to Alpine’s Wall of honor.

The parade route ends at the Alpine Community Center, where a carnival will include a petting zoo, bounce house, dunk tank, games and children’s activities.  There will also be a Wild West show, live band, barbecue and beer garden. For details, visit AlpineKiwanis.org.

Visitors can rock out with live music, see a patriotic ceremony, enjoy a kid's fun zone and a spectacular fireworks display at 9 p.m. For details, visit the city of Santee’s webpage and click the events calendar.

“Red, white and moo!” will be the theme of this year’s Descanso Days Parade and Fair on July 8th.   Parade entries will be judged on best of theme, most creative, and judge’s choice.

The parade starts on Viejas Grade and ends at the elementary school. The festival will be held at the Descanso Town Hall (24536 Viejas Grade Road in Descanso.) Be sure to arrive early since roads close for the parade starting at 9 a.m.

The Deerhorn Valley Independence Day parade and picnic returns this July 4th from 10 a.m. to 2 p.m. Spectators are encouraged to bring flags, drums, rattles, shakers and lawn chairs to enjoy the festivities.  Community members are invited to march in the parade including wagons, bikes, trucks, horses, goats and emus.  “If it moves, it can march!” the flyer proclaims.

The parade ends at the McKinley Field picnic area (see map below), where a $2 meal ticket includes hot dogs, watermelon, water and chips until supplies run out. Popcorn and cotton candy are also available for sale. You can also enjoy local vendors and crafters, plus a potluck-style dessert and goodies table.

NOW FOR A PREVIEW OF COMING ATTRACTIONS

Mt. Helix Park is partnering with the San Diego Astronomy Association to host “Astronomy Night” atop Mt. Helix on Saturday, July 15th from 8:30 to 10:30 p.m. Bring your own telescope or witness the cosmos through one provided by members of the SDAA, who will be on site to help you interpret the night sky.

Feel free to bring a picnic dinner (no glass bottles please) and enjoy a spectacular sunset prior to star gazing.

Music superstars Lionel Richie and Mariah Carey will rock the night at the Viejas Arena at San Diego State University on July 27th at 7 p.m. as part of their “All the Hits” tour.

Richie has won an Oscar, four Grammy Awards and 16 American Music Association Awards, among many other honors. He defied his parents and joined a band to escape Alabama and became one of Motown’s biggest success stories.

Mariah Carey is the best-selling female artist of all time, with more than 200 million albums sold to date and eighteen Billboard #1 singles, the most of any solo artist in history. With her distinct five-octave vocal range, songwriting and producing talent, Carey has won five Grammy Awards, nine American Music Awards, Billboard’s “Artist of the Decade” Award, and the World Music Award for “World’s Best Selling Female Artist of the Millennium.”

Tickets are available at the Viejas Arena website (https://as.sdsu.edu/viejas_arena/event/72).

The Julian Triangle Club invites you to help solve a hilarious crime at a murder mystery theater set for Friday night, July 28th from 5:30 p.m. to 9 p.m. at the historic Julian town hall.  Dinner will be catered by Jeremy’s On the Hill.

A well-seasoned County Fair opens under a cloud as a real estate tycoon plots to buy it out and close it down. This riles the locals who love the fair, especially the pig races – which are being targeted by protesters. Add in female country singers who will stop at nothing to claw past each other to get to the top, plus some romancin’ and you have the stage set for shenanigans…and murder!

The table that gives the best correct answer of “whodunit?” before the killer is revealed will walk away with a stellar Prize Basket.

Cost is $35.  For tickets or details, contact the Julian Triangle Club at (760) 525-5137 or email juliantriangleclub@gmail.com. You can also learn more at www.JulianCA.com.

The Julian Apple Pie Grand Prix will be held on Saturday, July 29 from 10 a.m. to 5 p.m.  This year’s vintage sports car show, parade and festival is a salute to the sports cars of Great Britain.

Cars will be on display on Main Street from 10 a.m. to 1 p.m., followed by a parade of these vintage cars that will proceed to Menghini Winery for a public viewing and festival until 5 p.m.  The festival will feature live music, plus food, beer and wine available for purchase.

The Julian Apple Pie Grand Prix is organized by the Julian Classic Motoring Society and the Julian Chamber of Commerce.