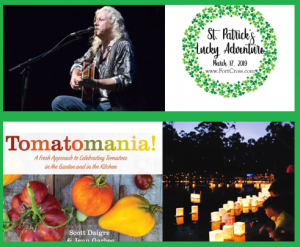 So scroll down for these events and many more.

Off Broadway Live theatre in Santee will present “The Bridge”, which opens March 2nd and runs through April 13th.  A special showing on March 24th will benefit homeless children and teens at Father Joe’s Villages.

The musical focuses on six people whose lives were forever changed by what happened one night on a bridge. The bridge knows their secrets and during a reunion of their high school football championship season, everyone will be there – and the bridge is waiting.

For tickets and details, visit https://www.OffBroadwayLive.com.

Mission Trails Regional Park will hold a wildlife tracking walk on March 2nd from 8:30 to 10:30 a.m. Guests will join the park’s tracking team on the Oak Grove Loop Grail to learn how to identify tracks and other signs by wildlife. These walks are suitable for the whole family.

Walks start at the Visitor Center on the first Saturday of each month. Participants are advised to wear long pangs and sturdy closed-toed shoes, bring plenty of water, along with a hat and sunscreen. For more information, visit the Mission Trails Regional Park website at www.MTRP.org.

The Anza Borrego Desert Natural History Association will host a Borrego Historical on Saturday, March 2nd from 8 a.m. to 3 p.m.

The tour begins at the association’s building on Christmas Circle, followed by a tour of Old Borrego, farming and agricultural sites where Caesar Chavez once led the farmworkers’ strike, lunch at the Palms at Indian Head, and a tour of Seley Rench.

In the evening from 6 to 8 p.m. visitors will enjoy a lecture titled “In the Footsteps of Juan Bautista de Anza”  followed by wine, cheese, and a living history presentation around the campfire to hear a historical reenactor bring to life a soldier from the expedition talking about his daily life on the historic trail.

To register for the program and get more information, you can visit the Anza Borrego Desert Natural History Association at www.ABDNHA.org. 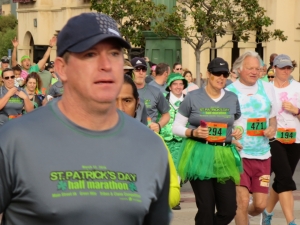 A St. Patrick’s Day 5K and half marathon will be held a wee bit early, on March 3rd in downtown El Cajon starting at the El Cajon arch. Funds raised will benefit East County charities. There’s also a beer garden and more at the annual event hosted by the Run East County Foundation.

You can preregister at 6 a.m. on the event day, or in advance online at www.stpatricksdayhalf.com.

Young Actors Theatre will present the musical, “Mary Poppins” March 7-17 at the Encore Theatre in Spring Valley. Based on the books and the classic Disney movie, the stage production of Mary Poppins received nominations for nine Olivier and seven Tony Awards, including Best Musical.

Even grown-ups can learn a lesson or two from the magical nanny who advises that "Anything can happen if you let it." You can get tickets at the Young Actors Theatre website at www.YATsandiego.org.

TOMATOMANIA MARCH 9-10 AT THE GARDEN

Tomatomania, the world’s largest heirloom tomato seedling sale, is coming to the Water Conservation Garden at Cuyamaca College in Rancho San Diego on Saturday and Sunday, March 9th and 10th from 9 a.m. to 4 p.m.

You can choose from dozens of varieties to plant in your garden and talk with experts about the various tomato varieties. For more information, you can visit www.TheGarden.org.

For a full list of all upcoming concerts in this series visit the Facebook page for Second Sunday Community Concerts.

Son of activist singer and songwriter Woody Guthrie, Arlo Guthrie’s career in music has spanned nearly 60 years. He first performed in public at age 13 and his first debut song of his own, Alice’s Restaurant, became a protest anthem.  He grew up around such well-known artists as Pete Seeger, with whom he collaborated for over 40 years.

Learn some history about St. Patrick as you kick up your heels with an Irish jig and jug band music, see snakes like those driven out of Ireland in a reptile show, target some four leaf clovers with slingshots, enjoy a petting zo, and venture into a land of leprechaun magic as you seek some special treasures in a scavenger hunt. For information on costs and details, you can visit https://www.fortcross.com.

Hooley’s Public House is celebrating 20 years in East County with the return of Hooleyfest on Saturday and Sunday, March 16 and 17 at Hooley’s Grossmont Center location. The hours Saturday are 5 p.m. to midnight and Sunday 11 a.m. to 6 p.m.  Ticket are available in advance at Hooleys or at the door.

Later on Sunday, Grossmont Center will host Whiskey Ridge and the ‘80s All Stars in concert.

Rock and roll doo-wop legends Sha Na Na will appear in concert at Sycuan’s Live Up Close theatre on March 17th at 8 p.m.

The group rose to stardom with their portrayal of Johnny Casino & the Gamblers in the movie Grease—the highest grossing musical film of all time, performing six songs on the soundtrack. The band’s piano player, “Screamin’” Scott Simon, co-wrote the song “Sandy” for John Travolta to perform. The group also starred in four seasons of their own TV series, the Sha Na Na Show.

For tickets, you can visit www.Sycuan.com.

Trees can reduce the erosion of topsoil by wind and water, cut heating and cooling costs, moderate temperature, clean the air, produce life-giving oxygen, and provide habitat for wildlife.

Volunteers are invited to help 20 plant trees in Hillside Park, along with the Lion’s Club and Key Club from Granite Hills and El Cajon Valley High School.

SDG&E arborists will be on hand to provide tips on tree planting, plus you can get conservation information at displays by SDG&E, Waste Management, the Helix Water District and the San Diego Regional Urban Forests Council will have displays providing conservation tips.

The Danny Green Trio will perform at Cuyamaca College in Rancho San Diego on Thursday, March 21st at 7:30 p.m.

The 1000 Lights Festival will be held at Santee Lakes on March 23rd from 4 p.m. to 8 p.m., featuring a beautiful spectacle of twinkling lights from floating lanterns as well as lively entertainment and food.

Roberto Carlos, Brazil’s number one singer, will be performing on Sunday, March 24 at 8 p.m. at the Cal Coast Credit Union Open Air Theatre at San Diego State University. The Latin music idol revered in many nations for his romantic music and sensual performances returns after five years to stage his “Amor Sin Limite” (Unlimited Love)” in cities across the U.S. Carlos had written over 600 ballads and has recorded duets with Jenifer Lopez and Alejandro Sanz.

​That’s all for this week! You can find details on all of these events and more in the calendar and events section at our website, www.EastCountyMagazine.org.