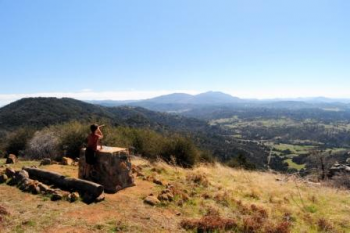 Plus we’ll have a preview of coming attractions including Oktoberfests in El Cajon and La Mesa, Fall Fest at Grossmont Center, and a Fair Trade Faire.

So click "read more" and scroll down for all of these events and much, much more!

Three local  alpaca farmers are teaming up to offer an open house on Saturday, September 26th from 10 a.m. to 4 p.m. in Descanso as part of National Alpaca Farm Days.

Visitors are invited to “feel the fleece” as well as tour the Atlas Alpacas Farm in Descanso, experience live demonstrations, learn about raising and breeding alpacas, and shop for alpaca products.

Atlas Alpacas, Hazard Alpacas, and the WW Ranch are all participating in this day at the farm for the whole family.For more information, you can visit www.AtlasAlpacas.com

A free hike up the Sky Island Trail in Julian will be offered on Saturday, September 26th, leaving from the Volcan Mountain Nature Center at 9 a.m. The 3-hour, mile and half trail is an easy ascent among ancient pines, oaks and fir trees—ending with 300-degree views of our county’s mountains and coast.

Due to a gated entry, an RSVP is required. For details you can visit http://www.volcanmt.org/

As part of Julian’s Apple Days Celebration, a two-day Apple Days Festival will be held September 26 & 27 at Menghini Winery featuring apple displays, music and dancing, an antique tractor display, children’s games and activities, gold panning demonstrations, a beer and wine garden, food and merchandise vendors, contests, and, of course, apple pie. The event runs from 10:00 am to 5:00 pm, both Saturday and Sunday.  The coronation for Mr. and Mrs. Apple Days will be held on Saturday.

The event began back in 1909 with apple ranchers celebrating their harvests. Back then the event included an all-night dance at the Town Hall and trick riding by local horsemen, drawing about 2,000 people. Today, Julian celebrates its apple season for a full two months, drawing tens of thousands of people with the festivities culminating in the Apple Days Celebration September 26 and 27.  The same weekend you can also enjoy an Oktoberfest in downtown Julian and melodrama performances by Julian’s Doves and Desperados, as well as the Laguna Mountain Rendezvous with historical reenactors just down the hill in Santa Ysabel.  For details you can check visit www.JulianCa.com.

The San Diego Concert Band, joined by the Delta Music Makers from British Columbia, will perform a joint concert in La Mesa this Sunday, September 27th at 5 p.m. in  Harry Griffen Park  behind Grossmont High School. The bands will perform individually and then combine to create a 150 piece concert band.

Delta Music Makers draw membership from the greater Vancouver, BC area. The San Diego Concert Band is based in La Mesa and draws musicians from throughout the county.

The concert is free and you are encouraged to bring family and friends, along with a picnic, and enjoy the concert.

The Grossmont College Afro-Cuban Ensemble will perform a free concert on the campus quad on Wednesday, September 30th from 11 a.m. to 1 p.m. The group specializes in performing popular Afro-Cuban and Brazilian musical styles such as the mambo, cha-cha, bossa nova, and samba.

Oktoberfest has been a tradition in La Mesa’s downtown village since 1942, drawing over 100,000 attendees in recent years.  This year, the La Mesa Village Merchants Association hosts the Oktoberfest on Saturday and Sunday, October 2 and 3 from 12 noon to 10 p.m. This year's festival goes back to its roots with a focus on German heritage.  The Bavarian Beergarden Band, Alpine Gemutlichkeit Dancers, and the El Cajon German Band highlight the entertainment.  There will be German food including bratwurst and real German beer served up at two beer gardens, plus vendors.  For details you can visit www. LMVMA.com.

Lamplighters Community Theatre in La Mesa continues its season with a mystery. Stage Fright opens on October 9th and runs through November 8th.

This eerie tale focuses on a drama critic led by an attractive production assistant into a recently discovered 19th century theater. There, he is to film an interview for a documentary on actor John Wilkes Booth, who once acted on these very boards.

But when the critic, notorious for his venomous reviews, downs a glass of drugged wine, he awakens to find himself tied to a Shakespearian throne on the stage of the old theatre--beside an actress he has savaged in reviews. She plans to carry out an elaborate plot to murder the critic who destroyed her career—inspiring  blood curdling confessions –all while capturing his most embarrassing revelations on video.

For tickets and details, you can visit www.lamplighterslamesa.com.

The German American Societies of San Diego will host their traditional Oktoberfest the first two weekends in October on Fridays, Saturdays and Sundays (October 2 - 4 and October 9 – 11 in El Cajon).  You can enjoy authentic German food and BBQ, a variety of German pastries, and authentic German music. There are also vendor and craft booths as well as a Kids Fun Zone. This annual celebration will be located at the German American Societies’ headquarters at 1017 South Mollison Avenue in El Cajon. For more information, visit www.oktoberfestelcajon.com.

Fair Trade certification means artisans and farmers in the poorest areas of the world receive fair, livable wages for their product or ingredients, offering the public “socially responsible” shopping. In addition, production standards must protect the envioronment, build economic sustainability, provide opportunities for education and health care for families, and protect young children from forced labor.

La Mesa’s Chamber of Commerce will present FallFest, a new festival to be held October 16 and 17 at Grossmont Center in La Mesa.  This event features country and rock ‘n’ roll musical artists including Brent Payne, winner of the best country song of the year award at the Hollywood Music Awards in 2012 for his hit single, Now and Forever. He’s nominated again this year for his song, Midnight Prayer.  A beer garden, food and more are also part of the fall festivities at this event.

That’s all for this week! You can find details on all of these events and more on our Calendar and in our Festivals and Events section online at eastcountymagazine.org.

We’ll be back next week with more festivals, events and attractions in San Diego’s East County.