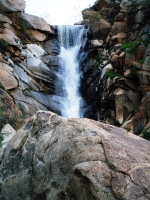 The teen was hiking with his family when he slipped and fell down an 80-foot cliff, landing in the water. The victim fell against a 17-year-old, injuring him.

Although one media outlet reported the deceased had engaged in a daredevil jump, a witness posted on another news site indicating the fall was accidental and official sources have termed the fall an accident.

San Diego Sheriff’s ASTREA helicopter airlifted the teens out of the canyon to the Ramona Fire Station, where an ambulance was waiting. Despite CPR efforts, the 16-year-old was pronounced dead in an ambulance from his injuries. The 17-year-old was transported to Palomar hospital.

Brian Harris, public information officer for Cleveland National Forest, told East County Magazine that the federal government has taken steps to protect visitors to the falls in the wake of several recent problems. “We beefed up law enforcement and we posted signage. People are no longer allowed to consume alcohol at the waterfalls sites or to jump, dive or climb on the waterfalls themselves,” he said, adding that the ban applies to all waterfalls in Cleveland National Forest, including Three Sisters and Mildred Falls as well as Cedar Creek. Overnight camping is also now prohibited.

Harris told Ramona Patch that officers will be stationed at both trailheads this week to prevent hikers from entering. A Union-Tribune story today indicates the falls may remain closed until they are dry at the end of the season, an announcement that has sparked numerous complaints on online forums from outdoor enthusiasts.

According to some reports, the vicitm became confused and took the wrong trail shortly before his fatal fall and apparently did not violate any of the new rules.

The Forest Service has indicated it will determine when to reopen the falls after conferring with legal counsel. The move comes following a series of accidents and rescues from the falls.

Incident Page Network reported a hiker with a head injury was air-lifted out over the weekend from Cedar Creek Falls; Poway Sheriff’s substation reportedly responded to that incident.

Harris said six air evacuations occurred on Saturday from the falls, but those were all due to dehydration and none were hospitalized. Two dogs have also died on the trail in recent days, according to media reports.

“We’re still finding a lot of people are taking just one pint of water,” Harris noted, adding that a minimum of one gallon of water should be taken on the challenging five-mile hike. Water at the falls is not tested for water safety and should not be consumed, he added.

“The other thing we found when we had our law enforcement out there this weekend was about 90 to 95% of people there were families,” said Harris. “They’re bringing infants and toddlers, but this trail is just not suitable for small children…It has been improved but it is still very, very steep and can be slippery after it rains.”

More people have been visiting the falls this year than in past years in part due to a new improved trail, but also because heavy spring rains have left the falls full of water for later into the year than usual. Falls are often drying up by this season, he noted, adding that murky water may obscure shallow areas or rocks below the water.