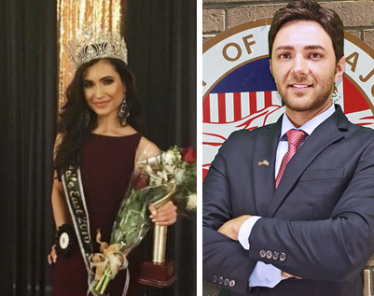 Kalasho provides documents to bolster his defense, though this isn't first time he has faced claims of fraud or ethics questions

Updated with comments from Tawfiq's attorney

June 7, 2017 (El Cajon) – A lawsuit has been filed against the Miss Middle East Beauty pageant  USA Inc. and Ben (Bessmon) Kalasho, organizer of the pageant and an El Cajon City Councilman.

The suit, filed by pageant winner Zhala Tawfiq and first reported by the Reader, claims the pageant is fraudulent, that prize money was not paid, and that after she objected to giving up passwords to her social media accounts, photos of her face photoshopped onto someone else’s nude body were posted on  an Instagram page named “Zhala_Tawfiq_Fanpage” with a  post reading, “Leaked images of Miss Middle East Beauty Queen.”  Soon after she was removed as pageant winner and the title was given to the runner-up.

Asked if he posted the photos, Kalasho told East County Magazine, “Absolutely not." He indicated Tawfiz was replaced due to not fulfilling terms of her contract.

Kalasho adds, "They should go find that IP address…I want the person who made the fake instragram account to get caught, too.”  Asked if anyone else with access to his computer might have had reason to post such images, Kalasho stated, “Nobody else has access to my computer.” The images could not be found online at the Instragram account listed in the lawsuit.

Kalasho  says Tawfiq breached her contract with the pageant by not selling tickets to this year’s pageant, not appearing at five mixers for the San Diego Chaldean American Chamber of Commerce  (which Kalasho headed up until stepping down recently to avoid conflicts of interest with his Council position), and didn’t post pageant information on social media. He contends he did not ask for her passwords and says of Tawfiq, “For her, this is about fame and money.”  He says he’s been contacted by Tawfiq’s attorney about settling the case but adds, “We’re not settling.”

Kalasho provided a copy of a release, waiver and legal document that he says was on the website all contestants agreed to, as well as a pageant winner contract signed by Tawfiq.  The contract specifies that the winner agrees to post on social media requests made by Kalasho, hs wife, the Chamber or pageant.  It  states that prize money will be paid in three payments and that if one or more requirements are not made in a timely manner, the prize money can be forfeited and new winner named.  Kalasho also posted copies on his Facebook page of two checks paid by the Chaldean American Chamber of Commerce to Tawfiq , each for $666.66 in November 2016 and May 2017 .  Both have the word “void” in the images posted on Facebook; Kalasho says this is because the checks were deposited electronically.

Tawfiq’s lawsuit names the “California nonprofit” Miss Middle East Beauty Pageant USA, Inc. , doing business as “Miss Middle East USA Beauty Pageant,” as well as Kalasho. Her suit contends that the pageant is  fraudulently acting as a nonprofit promising money for charity but without naming any charity.  Kalasho says, “We don’t say it’s a support of a nonprofit…We don’t say that anywhere, the pageant recycles the money back to the girls” as well as covering expenses for food,  hotel space rental for the event and more .  He insists that the pageant has never claimed it raised funds for any charities, even in its first year when the San Diego Chaldean American Chamber of Commerce was a charity before, he says, he changed it to a sole proprietorship. (Franchise Tax Board records show that the Chamber's nonprofit status was suspended in 2013.)

ECM attempted to fact check Kalasho's claim that the pageant was never raising funds for charity on the Internet Archive or Wayback Machine, but found that all screenshots of the pageant’s website archived through the years appear blank and have apparently been removed.

“We are our own charity,”  Kalasho said of the pageant.

But a check of the California Department of Justice’s registry for charities shows  that although an applicant number for someone in Santee was assigned for the Miss Middle East Beauty Pageant USA was assigned,  the registration status is listed as “not registered.”    A broader search for  any charity containing the words Miss Middle East turned up no listings.

Although archived copies of the pageant’s webpage are no longer available in the Internet archive, ECM located a 2014 pageant video  on YouTube in which Jessica Kalasho,  Ben Kalasho’s wife, states, “While preparing for the pageant we’ve had a lot of people donate and also sponsorships.”  According to eHow legal writer Terry Masters, “While it is the case that a for-profit business can accept donations, it has to be careful not to run afoul of a state's laws against soliciting the public for donations without registering with the state attorney general. If a for-profit business is asking for "donations," it has to at least make it clear that the business is not a nonprofit.”For profit businesses that use volunteer labor, violate state law as  the state of California affirmed when it cracked down on wineries that were found to be illegally using volunteers to pick grapes.

Attorney Lina Charry, who says she is representing Tawfiq, says Kalasho has made misrepresentations about her client and in past litigation, including some cases that involved  Charry personally.

This is not the first time Kalasho has faced allegations of fraud or ethics questions.

He's been involved in a string of lawsuits, winning some but losing others.

A jury in 2014 awarded $10,000 in damages to Ideal Market for fraud and breach of contract in a suit filed by Ideal Market against Kalasho.

Kalasho told ECM he was “not a principal and “just wrote the checks” in that case.  However according to the suit, Kalasho signed the contracts but did not have authority to sell a property he was attempting to sell, Charry noted.  The judgment document confirms Kalasho signed the contract and made false representation, according to the jury's findings.

Lemon Grove Ultra  Mart, Inc. obtained  a Small Claims judgment of $2626.00 + $500 in expenses against Kalasho, owner of Wize Guyz Inc.  in 2016; Kalasho has filed an appeal in that case.  The case involved a vehicle that went through the Go Car Wash owned by Kalasho and lost control, damaging property next door at Lemon Grove Ultra Mart owned by Charry.

Charry told ECM that Kalasho initially denied knowledge of the damage but says surveillance video provided by the Sheriff in Snate showed Kalasho was "right in the middle" of the incident.  She claims that after she took photos from her car outside Kalasho's home to document a process server serving notice of the damage suit, Kalasho filed for a restraining order against her. The court denied a temporary restraining order and a  permanent restraining order.

The only Democrat on the El Cajon City Council,  Kalasho has made waves and potentially political enemies with his outspoken and at times confrontational actions. He has fought to put  many  more items on the agenda than Council has customarily allowed and accused fellow council members of singling him out on a measure restricting use of ipads or other personal computers during Council sessions.  Most recently, he threatened to file a lawsuit against the City of El Cajon over a redistricting map approved that pits Kalasho, an Iraqi-Chaldean who is the only minority on the Council, in the same district as a white conservative Councilmember.  (The map did also create three majority minority districts.)

Kalasho has also drawn criticism for ageism due to a remark he posted on Facebook regarding the redistricting in which he said this about Councilman Bob McClellan, “I literally sit next to an 84 year old man on the dais.”

But Kalasho has drawn praise from some in the business community for his advocacy on behalf of business owners as Chamber leader and on the Council, where he has fought to get a sign ordinance changed. He has also gained support from constituents in Fletcher Hills for his concerns over airport traffic issues, from Democrats for proposing an unsuccessful measure to offer city jobs to the homeless, and from others in the community for hosting a series of town hall meetings  to hear from members of the public unable to attend afternoon City Council hearings.