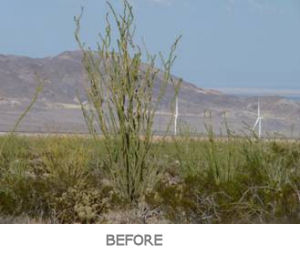 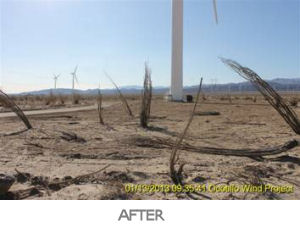 February 18, 2013 (Ocotillo) – As mitigation for major projects including Sunrise Powerlink and Ocotillo Express Wind Facility, energy companies were required to mitigate damage by restoring vegetation.  But now residents and some environmentalists are raising criticisms over the level of restoration efforts put forth by Pattern Energy and SDG&E. 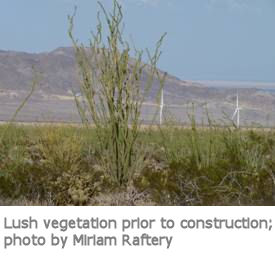 Prior to construction, the desert had a thick layer of vegetation, lush in places, including century-old Ocotillos and Chollas cacti, along with many other species.  The desert floor was bulldozed and massive excavations were dug to support wind turbines and high voltage towers, stripping off topsoil and laying bare the earth. 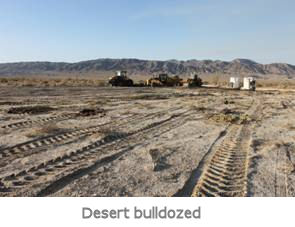 “This is Pattern’s attempt (if you can call it that) to replant the Ocotillos that they destroyed,” said photographer Parke Ewing, who has worked as a construction manager elsewhere.  “This is ridiculous…Many Ocotillos were planted only about eight inches deep with no root system, so in a slight wind they blew over.  Also note the broken stalks.  Most Ocotillos, if not all, are dead.”

Shown the images, Terry Weiner of the Desert Protective Council also voiced concern. “These Ocotillos will most likely not survive,” she said.

Kelly Griffin, manager of succulent plant development at Altman Plants, a nursery specializing in cacti including Ocotillos, also voiced doubts over the survivability of the Ocotillos replanted at the site. “They are tough plants ti it is more about timing and available water. They can root from just cuts placed in the ground, but the key word is 'can', she observed. 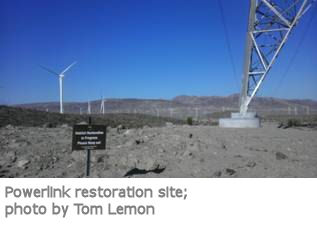 Griffin voiced surprise that Pattern had not been required to “replace plants destroyed or, at the very least, relocate the plants.”  She estimated the replacement value of mature ocotillos at $250 to $750, with towering ocotillos commonly found here before the energy projects at the high end of that range.

Pattern Energy did not respond to our requests for comments. 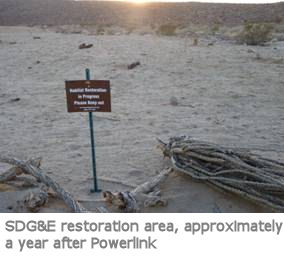 Jennifer Ramp, spokesperson for Sempra Energy (parent company of SDG&E) did respond.  She said dead Ocotillos laying on the ground are “vertical mulch” placed to discounted off-road vehicle enthusiasts and serve as wind breaks.  “We salvaged dead Ocotillo with permission from the BLM to use as vertical mulch.  In these same areas, we also salvaged all Chollas within project impact areas and have replanted all as of December 2012.”

Ramp told ECM in mid-January that all temporary impact areas have been seeded as well and overall, have “great germination and establishment for desert areas.” She added that rainfall has been low and that restoration will be an ongoing effort for the next five to 10 years per the Project Restoration plan.  Individual site-specific plans are being finalized with state and federal agencies; when finished they will be posted on the California Public Utilities site. 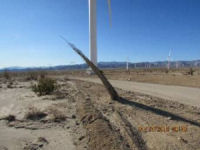 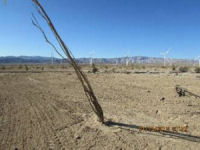 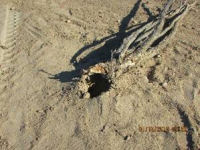 All seeds were collected locally; none were obtained from a commercial source in order to maintain “Genetic integrity of the habitats” and to help “maximized establishment and survivorship,” said Ramp. She added that seeds from over 20 species, including Ocotillos and Chollas cacti, have been planted.

ECM asked to see some of the plants that Ramp considers to have “great germination.”  She declined to reveal the locations, stating that due to the “fragility” of seedlings and recent Chollas plantings “We do not provide any specific information about our restoration sites aside from what is included in our annual monitoring reports.”

The first monitoring and maintenance reports won’t be submitted to the California Public Utilities Commission, Bureau of Land Management, U.S. Fish and Wildlife Service, and California Department of Fish and Game until December 2013. 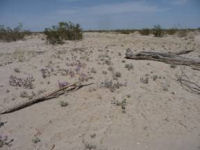 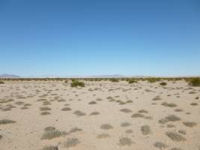 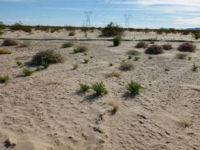 What else is there to say?

We saw the same pathetic "restoration" effort in McCain Valley near Lost Valley Rock because of the Sunrise Powerlink destruction there.

Something tells me that things like restoration and replanting aren't taking-up too much space on Patten's "to do" list.