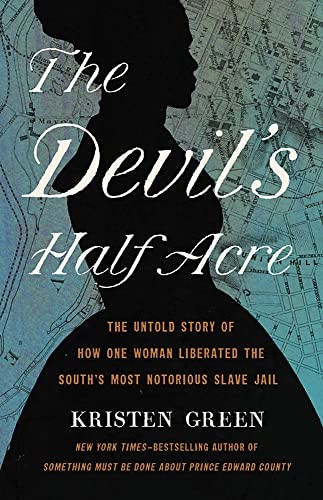 November 21, 2022 (San Diego) -- In The Devil’s Half Acre, Author and former San Diego Union-Tribune journalist Kristen Green provides details about Black lives in America, starting in 1619 and ends in recent times. Green takes us from slavery, through details about the lives of Blacks during the Civil War and after. More specifically, she closely shares details about 19th-century Richmond, the center of slave trading, giving the reader a view of slavery from an enslaved person’s experience.

“Like her mother before her and most likely her grandmother and great grandmother too, Mary Lumpkin was born enslaved. From the time she was in her mother’s womb, her mother must have feared the day they would be separated. That would have been her persistent worry, layered on top of the devastating knowledge that her child likely would experience hunger, beatings, and sexual abuse in addition to exhausting forced labor.”

The author makes the reader aware of how brutal enslavement was. She particularly focuses on enslaved women. Owners frequently violated them sexually. Some had a large number of children by their owners. Only in rare instances did the enslavers raise their progeny. More likely, they sold their offspring, even as babies, to profit from their abuse of their enslaved women. The lighter skinned girls were even sold as desirable sexual delights.

Green follows the lives of several women—women who probably knew one another. Some were treated as wives by their slave trader owners. Men in such a vocation were not considered desirable mates by white women—the men traveled often and their profession was considered undesirable. Only a few, including Mary Lumpkin’s owner, gave the mother of his children liberal freedoms.

Lumpkin’s Jail held captured runaways as well as men and women about to be shipped to plantations in the Lower South. Mary ran the jail and her household. In such a position, she assuredly witnessed atrocities that went on there. Nevertheless, she somehow managed to get her owner to protect their children by sending some to private schools and others received tutoring.

As abolitionism spread throughout in the north, some states declared themselves to be free—offering freedom to enslaved persons. Her owner sent Mary Lumpkin to Pennsylvania and even bought a house in her name. Green postulates that Mary probably united with her children.

After the Civil War, upon her owner’s death, Mary Lumpkin inherited the jail property and converted the jail into a school for freed Blacks. Green attempts to follow Mary’s offspring but records were spotty. Most of her children likely passed as white. Many may have changed their last names to eliminate being associated with their lineage. In a hundred years, Lumpkin family members completely lost their connection to Mary and her struggles and identified themselves as white.

Green carries the story into modern times—documenting the history of Black education in America. The book finishes with recent protests against Confederate monuments. These icons were erected as a way to help supporters of the South deny they lost in the Civil War. She even shares how the sites in Richmond were covered over and still have not been fully excavated and made into museums, which would better depict slavery in America.

As a white woman raised in the south, The Devil’s Half-Acre has expanded my understanding of how debasing slavery was in the U.S., and, like no other, this book has deepened my sympathy for the enslaved and their descendants.

Kristen Green is a nonfiction author. Besides The Devil’s Half-Acre, she published New York Times bestseller Something Must Be Done About Prince Edward County. She has worked as a journalist for two decades for papers including the San Diego Union-Tribune and the Boston Globe.