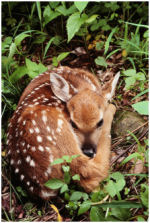 November 2, 2011 (Sacramento) -- The Department of Fish and Game (DFG) reminds out-of-state hunters to take appropriate precautions to prevent the introduction of Chronic Wasting Disease (CWD) into California.
CWD is a neurological disease that does not affect humans, but is fatal to deer, elk and moose.
Prior to leaving the state, big game hunters are asked to review DFG’s short online video that shows how to properly process deer or elk before bringing it across state lines. The video can be viewed on DFG’s website at www.dfg.ca.gov/wildlife/hunting/deer/cwd/. (Please note that the video is graphic in nature.)
“There is real concern that a CWD-infected carcass will be transported into California and improperly disposed of in deer or elk habitat, resulting in infection in California cervids,” says DFG Senior Wildlife Veterinarian, Dr. Pamela Swift. “CWD has the potential to devastate our deer and elk populations if it enters the state.”
California hunting regulations specifically prohibit importing brain or spinal cord tissue from deer and elk harvested out of state to minimize the risk of introducing CWD into the state. Hunters are encouraged to bone out their deer or elk harvested out of state and only bring in deboned meat. In addition, it is recommended that some parts are properly disposed of and not consumed, including eyes, lymph nodes, tonsils and spleen from these animals.
Wardens have the authority to inspect harvested game and conduct vehicle stops when successful hunters return to California.
“Taking the time to learn about safe harvesting practices and current state laws is the ethical responsibility of every hunter,” said DFG Assistant Chief Paul Hamdorf. ”DFG makes every effort to educate the public about the dangers of diseases like this one, because just one mistake on the part of an uninformed hunter could potentially harm populations.”
CWD regulations passed in 2002 were updated in 2008 to help protect the state’s deer and elk herds. Summaries of the regulations are printed in the 2010-2011 Mammal Hunting Regulations (www.fgc.ca.gov/regulations/current/mammalregs.aspx) and the 2011 California Hunting Digest Big Game issue (www.dfg.ca.gov/publications/digest/), and are codified in the California Code of Regulations Title 14, Section 712.
The regulations state that only the following hunter-harvested deer and elk parts are allowed into California:
• portions of meat with no part of the spinal column, brain or head attached (other bones, such as legs and shoulders, may be attached)
• hides and capes (no spinal column, brain tissue or head may be attached)
• clean skull plates (no brain tissue may be present) with antlers attached
• antlers with no meat or tissue attached, except legally harvested and possessed antlers in the velvet stage are allowed, if no meat, brain or other tissue is attached
• finished taxidermy mounts with no meat or tissue attached (antlers in the velvet stage are allowed if no meat, brain or other tissue is attached)
• upper canine teeth (buglers, whistlers and ivories)
California hunters who have been successful out of state must also complete and return the “Declaration for Entry into California of Game, Fish, Birds or Animals” form prior to returning home. The form is available both at DFG regional offices and online at www.dfg.ca.gov/enforcement/docs/declaration_form.pdf. Failure to complete the forms could result in a citation, fines or a misdemeanor conviction.
California hunters should also be aware that other states have regulations in place to prevent the spread of CWD. Hunters should always review regulations specific to any state where they hunt, to be sure they are in compliance with local laws.
CWD has been detected in Colorado, Illinois, Kansas, Maryland, Michigan, Minnesota, Montana, Missouri, Nebraska, New Mexico, New York, North Dakota, Oklahoma, South Dakota, Utah, Virginia, West Virginia, Wisconsin and Wyoming. It has also been detected in the Canadian provinces of Saskatchewan and Alberta. To date, there is no cure for the disease, which remains resilient and has a long incubation period.