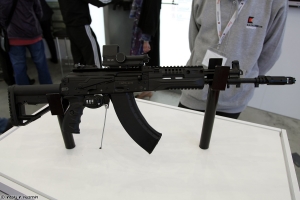 Dick’s Sporting Goods has announced that it will no longer sell assault rifles or ammunition that enables mass shootings in its stores. Dick’s had earlier stopped sales of assault weapons after the Sandy Hook elementary school shooting, but has now expanded that ban to its Field and Stream stores and further, broadened the ban to include stopping sales of high-capacity ammunition magazines and requiring that for all other gun purchases, the buyer must be over 21 years old.

The retailer tweeted the announcement this morning, along with this message: “We deeply believe that this country's most precious gift is our children. They are our future. We must keep them safe.”

CEO Ed Stack said the high school shooting in Parkland, Florida was a key motivator after Dick’s learned that the shooter purchased a gun at Dick’s, though that particularly weapon was not used in the massacre that killed 17 people.

"We did everything by the book. We did everything that the law required, and still he was able to buy a gun," Stack said on ABC’s Good Morning America. "When we looked at that, we said the systems that are in place across the board just aren't effective enough to keep us from selling a gun like that. And so, we've decided we're not going to sell the assault-type rifles any longer."

Exactly what needs to be done. Hopefully this will inspire many more gun retailers to do the same.