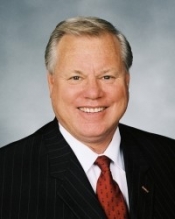 May 26, 2014 (San Diego)--Supervisor Bill Horn is under fire for operating a nonprofit organization that several tax experts say violated state and federal laws.

INewsSource first uncovered Horn’s ties to Basic Faith when it conducted a back ground check on his candidacy and discovered a $1,372 tax lien filed against the charity for failure to pay California state taxes.  The lien raised a curious question: Why would a nonprofit, that is not required to pay taxes, have a tax lien?

Because the IRS had revoked the nonprofit’s tax exempt status, and so the state sought to collect corporate taxes from the organization.

Records show Bill Horn acquired the nonprofit around 1979 and changed its name from Sojourner’s Foundation to Basic Faith.  He never filed tax returns, or form 990s, which are required for charitable organizations.  Basic Faith no longer exists today; it has no website or assets, and Horn officially dissolved in 2012 after losing nonprofit status for his so-called charity.

Horn, a real estate broker, has said he “bought” the charity to hold money from real estate deals. He claims to have sold millions of dollars worth of real estate, giving interest to Christian missionaries abroad.  “I wouldn’t have to pay taxes on the money earned,” Horn said, KPBS reported.

KPBS asked five prominent tax experts to look at the INewsSource report and documentation. All five concluded that Horn’s actions with Basic Faith violated both federal and state laws – and that he could face civil and possibly criminal sanctions.

Attorney Marcus Owens used to head up the nonprofit division at the IRS for a decade.  He told KPBS, “There is virtually nothing that I would describe as `legal’ about the way the Supervisor appears to have managed the charity.”

Frances Hill, a law professor, helped shape U.S. nonprofit tax policy. She told KPBS that the abuse of the law was “blatant” and suggested both the IRS and state authorities have grounds to investigate Horn.

Horn has insisted that the charity was part of his private life. “It was mine. I owned it. I bought it,” he reportedly said.

But it’s against the law for anyone to buy a nonprofit.   Nonprofits must also be run for the public good-not private gain.  They just file tax forms each year. And they can’t engage in political activities.  Yet in 2000, Horn hosted a Basic Faith Foundation National Day of Prayer, featuring Republican presidential candidate Alan Keyes as keynote speaker.

Some religious organizations and other foundations can be considered private foundations. But they must still file tax returns and cannot be run for private gain, nor political purposes.

Horn has stopped talking about the foundation, under media scrutiny over wrongdoing.  Instead, a political consultant told KPBS that Horn’s memories are decades old and that tracking down details on transactions would be difficult it not impossible.

Owens said sanctions could range from criminal sanctions including fines and jail time through civil penalties for failing to keep books and records, file tax returns and pay taxes plus interest – and he could face tax penalties if, Owens said, “as I suspect, somebody’s taxable income was being sheltered.”

The revelations come at a bad time for Horn, who squares off in the June primary election against Oceanside Mayor Jim Wood, a former police officer.

Whether the allegations of tax dodging and misuse of a charity will leave Supervisor Horn vulnerable to losing his seat in the election will be up to the voters in District 5, which includes the inland East County communities of Borrego Springs, Ranchita, and Warner Springs, as well as  Valley Center, Pauma Valley, Pala, Carlsbad, Oceanside, Rancho Santa Fe, San Marcos, Vista, Bonsall, Fallbrook, De Luz and Rainbow.