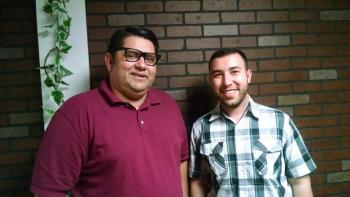 August 28, 2015 (El Cajon) – Miguel Angel Soria and Peter Alkatib at Diego Valley Charter School in El Cajon are working wonders, helping 80% of their students—all at risk and drop-out youth—graduate with a high school diploma and go on to college or a career pathway. They are also co-producers of the Chaldean Voices documentary film debuting soon on KPBS and in El Cajon to celebrate Chaldean-American month.

About 30%  to 40% of the student body are Iraqi Chaldeans and most of the rest belong to other minority populations.  The school offers flexible scheduling to accommodate students who must work or raise children, also providing tutoring and other help to assure their students achieve their dreams.

Soria,also a teacher, has been involved in the arts from an early age including poetry, music and filmmaking.  He has also been program director at the New Americans Museum.

“ I think that America draws its strength from its diversity,” says Soria, who was eager to help make the film when Alktib approached.

“For a lot of the students, this was the first time they could participate in the democratic process,” Alkatib said.

The two filmmakers and educators also offered an update on progress made by the four students profiled in their documentary.

“Everybody’s still in a very positive space and they basically see the film as a huge milestone in their life,” Soria concludes.

The film showing in El Cajon will be free, but DVDs are being made with proceeds to benefit scholarships for students.