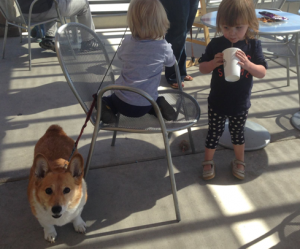 January 3, 2015 (Sacramento)—“I wish everyone bone-appetit,” quipped Assemblywoman Mariko Yamada, author of a bill signed into law by Governor Jerry Brown that now makes it legal for restaurants to allow patrons to bring their dogs for dining on outdoor patios, effective January 1st of this year.

The bill doesn’t require a restaurant to accept doggie diners. Those that opt to allow canines must have a separate entrance (not through the restaurant) and restaurant owners can still set additional rules of their own. 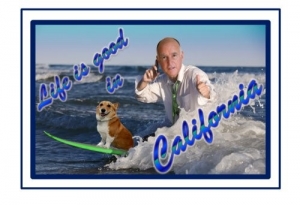 Supporters said the bill was necessary because bringing a dog to an outdoor café has been illegal statewide, but some counties opted not to enforce the law. That left restaurants that catered to pet owners in legal limbo, facing risk of a lawsuit.

The bill does have some limits to protect public health. Dogs are banned from sitting on chairs, benches or tables and cannot have contact with cooks or servers.  If a dog makes a mess, owners who fail to clean up after their pooches can be charged extra and restaurateurs would be free to ask owners with ill-behaved dogs to leave.

Allowing dogs in outdoor cafes has long been legal in much of Europe, and restaurants that make dogs and their owners feel welcome now have a potentially loyal new market to attract.

A few local restaurants have already been allowing dogs to accompany owners on outdoor patios including Anthony's in La Mesa and Downtown Cafe in El Cajon, which even has a "Yappy Hour" each Thursday from 4 to 7 p.m.

The measure passed almost unanimously with nary a bark of opposition and just one no vote. It was signed into law by Governor Brown, who is often seen around the capitol city with his Corgi, Sutter Brown—a dog so popular he has his own Facebook page—and yes, it includes a snapshop of Sutter savoring life in a sidewalk café—among other places.

I had dogs years ago, Shetland Sheep dogs. Very smart and well trained, sit meant stay and Bandit and Rosie would never move until I told them it was OK, by hand commands. Many people can't control their children at a restaurant, I'd never dine at a place that allows dogs.