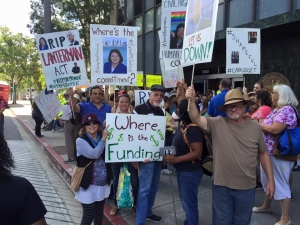 September 6, 2015 (San Diego)—Over 24,000 people with developmental disabilities in San Diego and Imperial Counties rely on state services to survive.  Yet California’s funding levels have fallen to the lowest in the nation, according to the Association of Regional Center Agencies (ARCA).

While the cost of services has risen 30%, funding has lagged far behind. Yet a funding increase for services to the disabled was stripped out of the state budget this summer and thus far, state lawmakers have failed to act on emergency special session legislation to restore funding to provide vital help to people with conditions such as Downs Syndrome, Cerebral Palsy and Autism.

Since then Speaker Atkins’ website has posted press releases about her efforts to save rhinos from poaching, help immigrant crime victims and prisoners reentering society, but no comments have been release regarding her views on funding for the disabled since the recent rallies.

On September 4th, an estimated 1,500 advocates for increasing funding for the developmentally disabled marched at the state capitol and paid visits to their legislators.

The Lanterman Law requires funding of such service to assure that developmentally disabled people have appropriate care and help to remain independent. But the Lanterman Coalition, organizer of rallies across the state urging a funding increase, say legislators have made that law a hollow promise by dropping funding from the budget.

According to the Lanterman Coalition’s website at www.lantermancoalition.org, 65 legislators signed a letter in May urging a 10% across the board increase for developmental disabilities funding.  Among San Diego legislators, Democratic Senators Ben Hueso and Marty Block along with Republican Senator Joel Anderson signed the letter. So did Assembly members Brian Jones, Brian Maienschein and Rocky Chavez, all Republicans.

Conspicuously absent from that list are Speaker Toni Atkins as well as Democrats Shirley Weber and Lorena Gonzalez.

Mark Klaus is President and CEO of Home of Guiding Hands in El Cajon, which serves developmentally disabled people.  He told East County Magazine, "To date, we have not had a response and / or any communication from Speaker Atkins office.My understanding regarding why both Atkins and Shirley Weber did not sign onto the letter was due to their leadership positions.  Atkins as the Speaker and Weber as the Chair of Appropriations.  Both have stated that they support our cause, but to date nothing has happened.  We may be a priority, but we are definitely not THE priority!"