"You may remember that when the City of San Diego experienced the devastating wildfires in 2007, the citizens of Yokohama donated over one million yen to the Wildfire Disaster Relief Fund." -- Harry Bishop, San Diego-Yokohama Sister City Society 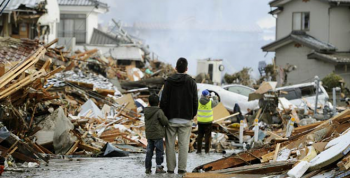 March 21, 2011 (San Diego) – Victims of the 2007 wildfires our region received help from San Diego's sister city, Yokahama Japan. Now, some local residents are seeking to give back to Japanese people in need. The San Diego-Yokohama Sister City Society is establishing a disaster relief fund for victims of the 9.0 earthquake and tsunami in Japan.

“We are asking everyone to join us to help those who lost loved ones, homes, and communities to this disaster,” Harry Bishop told East County Magazine.

To date, the Japanese National Police Agency has confirmed 8,649 deaths, 2,644 injured and 12,877 people missing across eighteen prefectures, as well as over 125,000 buildings damaged or destroyed, the Sister City website states, adding, “The San Diego-Yokohama Sister City Society stands ready to assist in relief efforts and is currently accepted donations. 100% of all donated funds will go directly to the City of Yokohama where it will be distributed to a variety of relief and emergency service agencies in Japan’s hardest-hit areas.”

Checks may be made payable to the SDYSCS and note that your donation is for The Japan Disaster Relief Fund. Donations may be mailed to the San Diego-Yokohama Sister City Society, P.O. Box 122842, San Diego, CA 92112-2842.

Located 120 miles from the epicenter, just south of Tokyo, Yokohama “experience very little damage and everyone was safe,” Bishop said, adding that his wife, the president of SDYSC, had spoken with a city official in Yokohama. So the organization is focusing on raising relief funds that will be distributed to help survivors in Japan’s most severely impacted areas.

The Sister cities Society was organized in the mid-1950s under President Dwight D. Eisenhower to foster positive relations between the U.S. and Japan; a large Japanese friendship bell and gazebo on Shelter Island near the harbor entrance stands as a reminder of that bond.

Kaneko Bishop, president of the San Diego-Yokohama Sister City Society, told the Union-Tribune that she has faith that Japan will rebound from the current disasters, citing the Japanese people’s long history of patience and perseverance. “Even after World War II,” she observed, “they never have forgotten what Americans have given us to start, and what we’ve become.”

This is a great relief activity. May you be fruitful in your efforts.