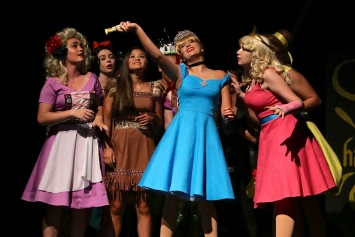 June 26, 2019 (Spring Valley) - The Princess Complex is the age-old idea that you’re only desirable and valid if you are a beauty-obsessed, ditzy, insecure, Bambi-like-waif. Of course, this is not the Disney princesses at all. Nor is it what we want our daughters and loved ones to be. This show is about females being empowering and independent.

YAT, Young Actors Theatre, presents the show “Disenchanted.”  They do a wonderful job. Ten princesses sing their tales of woe on life as it has become for them, now that the shine of the fairy tale has worn off. The costumes are spot on. You can definitely identify each of the princesses by the array of colorful costumes inspired by the gowns we know and love.

The cast is lead by Emma Ragen as Snow White, a tough cookie. Likely a strong independent woman, Regen, poured herself into to the role, but I did not like the character.  Her co-leads, Cinderella, played by Ellison Wavra and Sleeping Beauty, played by Kinzie Pipkin, are somewhat more likable roles. Belle was played by Maria Mintelli, Mulan by Madeline Tulagan, Ariel by Astrid Pett and Pocahontas by Brookelyn Isackson. There was also the Princess who kissed the frog, Olesia Winbush, Rapunzel by Kaylee Fulle and Princess Bldroulbadour (Jasmine), played by Maxine Levesque. Although the show is mainly singing, these girls brought the acting. Laughter flowed from the audience. The message was heard loud and clear. 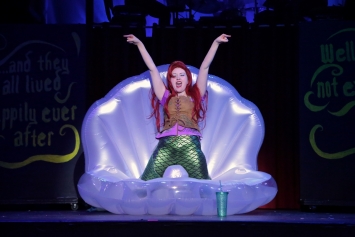 My favorite was Madeline Tulagan as Mulan, small but impactful and she had the strongest and most beautiful singing voice. Astrid Pett did a great job as the Little Mermaid. Loved her seashell, and the little sea friends. My other favorite number was from Brookelyn Isackson as Pocahontas, when she sang "Honestly,” the other Princess's strung colorful leaves about her, so beautiful.  Another cool aspect was Jasmine's flying carpet, ingenious.

Although the message is strong and the show well done, I’m not a fan of the story.  Of course fairy tales are not real life and these princesses are from long long ago. We now want a strong, independent, brave female role model and that's what Disney’s new heroines portray. However, we need the fairy tale. They are simply about the romance of finding your true love. Many girls today would love to find their Prince and stay home with the kids. Unfortunately, that's not often possible. It does not mean they have the Princess Complex. We need fantasy. Give me the fairy tale.

The show is directed and choreographed by Chrissy Burns. There’s a lot of choreography oi this show and Burns is doing two casts of the performance based on the book, music and lyrics by Dennis T. Giacino.

The music is live by The Merry Minstrels. Jerrica Stone on Piano, Chris Potente, drums and Cristian Mejia, on Bass provided a flawless musical performance.

A second cast will perform June 27-30 for five performances. If you want to send a strong message to your teen daughter or enjoy roasting princesses this is your show. Laughter abounds. Warning:  strong language is used. Not a show for the young.