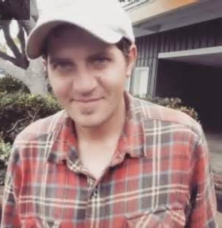 July 14, 2020 (San Diego) – Sheriff’s Deputy Aaron Russell, 23, has been charged with second-degree murder for shooting and killing Nicholas Bils, 36, on May 1st after the unarmed man escaped from a California State Park vehicle outside the jail downtown.

In an interview with NBC 7, the victim’s mother, Kathleen Bills, said that police told her Bills was putting golf balls in Old Town State Historic Park when rangers told him the park was closed due to COVID-19 and told him his dog needed to be on a leash. She indicated that her son was a paranoid schizophrenic who was afraid of law enforcement. Detectives from San Diego Police reportedly told her that her son swung a golf club putter near the rangers, then ran away.

The rangers later arrested him on a warrant for assault. They put him in a truck with the windows partly rolled down, which he escaped from as the truck stopped outside the jail.

Sheriff’s Deputy Russell fired four shots at the fleeing suspect. According to a diagram provided to Bils’ mother by San Diego Police, one bullet struck her son in the back, another in his leg, a third in his arm and chest, and a fourth grazed his flank.

According to two SDPD homicide officers, Russell was running toward vehicles stopped in traffic when he was shot, the Los Angeles Times reported.

A new state law, Assembly Bill 392, that took effect on January 1, 2020 prohibits officers from using lethal force except when necessary to defend against an imminent threat of death or serious bodily injury to the officer or another person. Officers may use non-lethal force, such as tasers or beanbags, in other circumstances.

“I have to bury my son and I want to know why he’s dead,” Bils told NBC 7 in early May. “Why? Why is my son dead? He was mentally ill. It’s not his fault he doesn’t understand.”

Deputy Russell resigned from the Sheriff’s department on May 6, five days after the deadly shooting. He had worked for the department for only 18 months.

“We reached the decision to file criminal charges following a thorough review of all the objective facts and evidence in this case by specialized prosecutors and investigators in our Special Operations Division,” said District Attorney Summer Stephan. “When a life is taken, we must make decisions based in facts and law, and not ones that are influenced by the status of the accused as a peace officer nor the status of the victim. These decisions must be made solely in the interest of justice and not based on favoritism nor public opinion. Every person must be accountable under the law,” she adds.

The deputy was not wearing a body camera because he works at the jail and is not required to do so, a policy that the Sheriff’s office has indicated is now under review. There is surveillance video, the District Attorney confirms, however it is not being released to the public at this time because it is evidence that will be presented at trial and releasing it could prevent the defendant from having a fair trial.

In addition to second-degree murder, Russell is also charged with alleged use of a gun. Bail has been set at $1 million. He is slated for arraignment tomorrow at 8 a.m. in Superior Court.

If convicted on all charges, he could serve 15 years to life in prison. 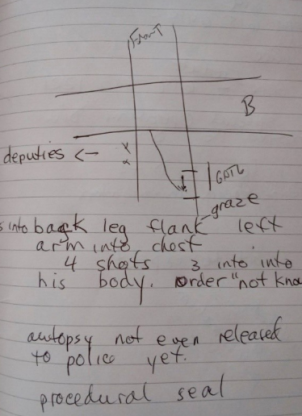