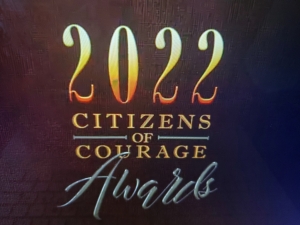 “I want to acknowledge the hundreds of people tuned in right now,” started off Stephan, who also acknowledged the hard work of her agency’s crime victim unit. Stephan noted that one crime victim unit advocate typically deals with 100 new victims a year. The unit also works to identify those that should be honored for their courageous acts.

Stephan also singled out Nathan Fletcher, Chair, of the San Diego County Board of Supervisors, and Supervisor Nora Vargas, Vice Chair, for their support. Stephan was presented with a proclamation for National Crime Victims’ Rights Week from them.

The awards ceremony was started in the early 1990s. The 2022 ceremony was in conjunction with National Crime Victims’ Rights Week held April 24-30, 2022.

Each recipient displayed their own variation of bravery that was out of the ordinary.

Oscar Stewert stepped into the fray – a surreal situation when a shooter entered the Chabad of Poway and started shooting. Stewart, instead of fleeing, went after the shooter. The shooter retreated to his car with Stewart in pursuit; Stewart even banged on the gunman’s windows. The shooter sped off, but was apprehended after he called law enforcement to turn himself in.

Video confirmed the actions of Oscar Stewart’s bravery and the selfless efforts he took to safeguard other’s lives.

The next hero, Eddie Michel, saved a San Diego City College student in 2020 from a sexual assault and getting beaten up even more than she had been. Michel heard the attack and did not shirk in stopping the assault taking place on the campus.

The next hero was Rosa Martinez.  A gunman entered an Otay Mesa Church’s Chicken in 2019 and shot employees. Martinez, who had exited the fast-food restaurant reentered the site and assisted the employees who were shot. She did not drive off out of fear of an active shooting. Martinez stayed to help.

The last hero, Bruce Mezan, became a hero in his own right by touring and speaking about the dangers of drunk drivers, after being struck by a 24-year-old drunk driver.

“It was really a miracle that he survived all those very serious internal and external injuries,” said Stephan. Mezan’s right foot was amputated as a result of the accident.

Mezan wanted to turn around that horrific accident into something positive and has since spoken to numerous groups on the dangers of drunk driving.

“I hope today’s event has inspired you,” said Stephan at the end of the 28-minute zoom ceremony.

The four individuals, did indeed, display courage in the face of extraordinary circumstances.

Stephan quoted author Maya Angelou: “Courage is the most important of all virtues, because without courage, you cannot practice any of the other virtutes consistently.”