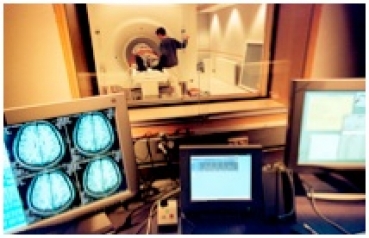 A new study by neuropsychologists at San Diego State University suggests that in people with autism spectrum disorder (ASD) the brains’ hemispheres are less likely to specialize one way or another. The finding gives further insight into how brain development in people with ASD contributes to the disorder’s cognitive characteristics.

The study, led by Ralph-Axel Müller, Ruth Carper and Jeffrey Treiber of SDSU’s Brain Development Imaging Lab, investigated how connections within the brain develop differently in children and adolescents with ASD than in their typically developing peers. Using a magnetic resonance imaging (MRI) technique known as diffusion tensor imaging, the team studied the brains of 41 participants with ASD and 44 without, examining how densely connections formed between different regions of white matter in the brain.

They found that in typically developing young people, the right brain hemispheres had densely packed connections.

“This fits with the idea that the right hemisphere has a more integrative function, bringing together many kinds of information,” the team wrote in a summary of their research.

However, in the participants with ASD, these brain connections were more evenly distributed across both hemispheres. The findings are published in the December issue of the Journal of the American Academy of Child & Adolescent Psychiatry.

That lack of specialization could manifest itself in what Müller calls “weak central coherence”—a concept best summed up in the idiom, “not seeing the forest for the trees.” Many people with ASD are very good at seeing details but have difficulty putting it all together into a cohesive narrative, he explained.

More research is needed to determine whether these brain-connection asymmetries cause this inability to cohesively assemble information, or are actually the result of it, Müller added. That and other future research will benefit from SDSU’s first imaging facility, which will play a central role within the Engineering and Interdisciplinary Sciences Complex, scheduled to open in 2018. The facility’s MRI machine will be installed early next year.