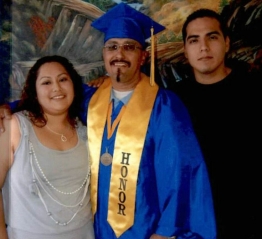 November 29, 2015 (San Diego's East County) - A Superior Court judge in Los Angeles has ordered the conviction of Luis Vargas overturned, after DNA evidence proved that he spent 16 years in prison for a series of rapes that he did not commit.

The California Innocence Project at California Western School of Law in San Diego requested the DNA testing of evidence from crime scenes that were never tested before.  Vargas had been convicted of three rapes solely on the basis of eyewitnesses based on a teardrop-shaped tattoo under his eye.

But the DNA evidence proved that the rapes were actually committed not by Vargas, but by the “Teardrop Rapist,” a man responsible for at least 35 rapes in Los Angeles over the last three decades. The Teardrop Rapist has never been caught and is on the FBI’s most wanted list.

On the day of his sentencing, Vargas told the court he was concerned that the real criminal remained at large and could rape or kill more victims.  He later sent Project Innocence a letter about the Teardrop Rapist and suggested the Project seek DNA testing of any remaining biological material.

Raquel Cohen, Staff Attorney of the California Innocence Project, praised the Los Angeles County District Attorney’s office for agreeing to examine the case and join in the petition to reverse the conviction. She added, “This is how cases should be resolved.”

Upon his exoneration, Vargas, now 46, burst into tears of joy in the courtroom.

Although cleared of the crimes for which he was imprisoned, Vargas has an immigration hold from an incident years earlier and remains in custody. Project Innocence has indicated it hopes for a speedy release so that Vargas can spend the holidays with his loved ones, but the specter of deportation continues to haunt him as he remains behind bars..

Students and faculty and Cal Western School of Law donate over 20,000 hours of their time each year to community projects including the California Innocence Project, which  receives approximately 1,500 claims from inmates each year and has freed 20 wrongfully convicted clients since its inception.  You can read more at: http://CaliforniaInnocenceProject.org